Looking for answers to cause of dead cattle 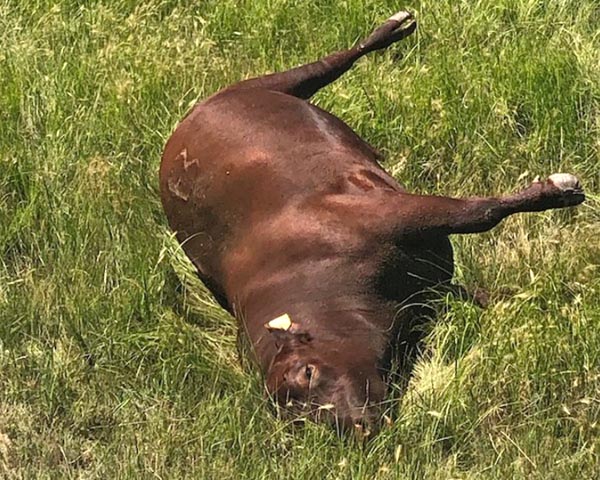 When Craig Fisketjon’s wife, Brenda, called him on the cell phone a month ago while he was haying to report that she had found a dead cow in a pasture they leased, the McKenzie County rancher was concerned, but not alarmed.
But as the days went on and more cows would be found dead on a daily basis in that same pasture, Fisketjon knew he had a serious problem.
“I had 75 cow-calf pairs in that pasture,” states Fisketjon. “I immediately moved them all to another pasture.”
By the time Fisketjon moved his cattle from the pasture about 11 miles east and one mile north of Watford City, he had lost seven registered Red Angus cows and a $6,000 young Red Angus bull.
“They all looked great,” stated Fisketjon. “And then they went down and they were gone.”
Fisketjon suspected that for his cattle to die that quickly, something must have poisoned them. And the most likely culprit had to be from a water source.
So late last month he reached out to Karolin Jappe, McKenzie County Emergency manager, and told her of his concerns.
And after some investigation by Jappe and Todd Foster, McKenzie County’s senior code enforcer, Fisketjon’s suspicions of possible water contamination seemed to be right on target.
But neither Jappe nor Foster can so far say definitely what impacted the well water in the pasture or if some other contaminants could have found their way into a creek that flowed through the pasture.
But they have a couple of theories.