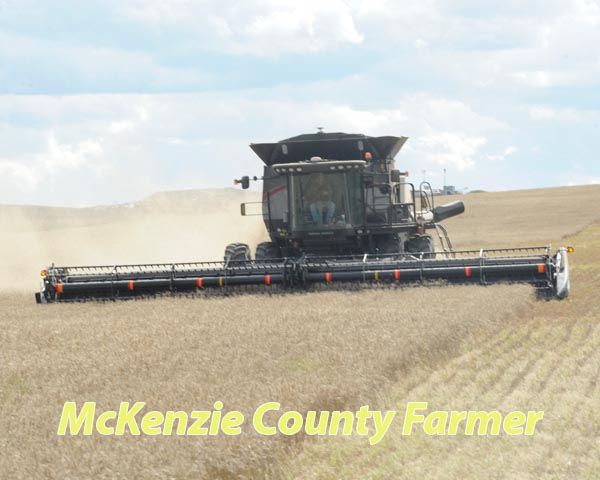 As Kirk Olson stood next to two semis sitting idle waiting for more spring wheat to come off his field north of Arnegard last Wednesday, he could only shake his head in disgust as a rain shower forced yet another delay in wrapping up this year’s small grain harvest.
“We’re pretty fortunate compared to other farmers,” stated Olson, as he watched his father climb off the combine due to wet conditions. “We’ve only got about 250 acres left to harvest.”
According to Olson, he began combining his 3,500 acres of wheat and peas the first week of August. And now, eight weeks later, because of the wet weather in September, he’s just now hoping to wrap things up.
In the month of September alone, Olson says that he has received over six inches of rain at the farm.
Like other McKenzie County farmers, Olson has had to deal with a deluge of rains during the month of September that has not only delayed harvest, but also severely damaged yields.
“The elevators here aren’t taking our grain now because of the poor quality,” states Olson. “We’re going to have to bin it and hope that the elevators will eventually take it.”