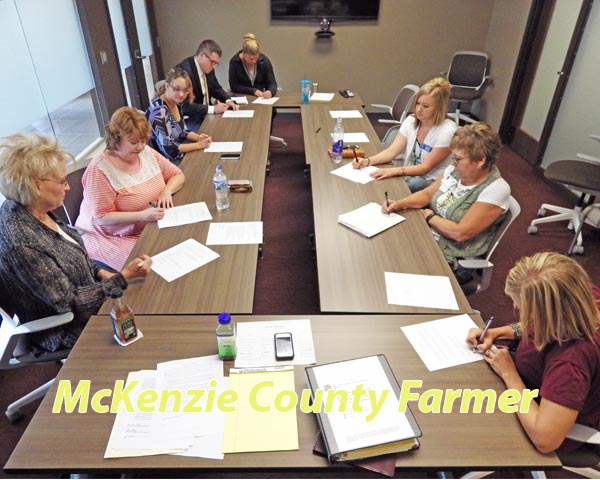 Multiple agencies met Friday, July 22, at the McKenzie County Courthouse to sign memoranda of understanding for services provided to victims of domestic violence and sexual assault.
The MOU signing comes nearly after a year of determining what services each agency will provide to victims of intimate partner violence and sexual assault.
“We’ve come a long way,” said Lana Bonnet, director of Family Crisis Shelter in Williston.
McKenzie County’s sexual assault  response team, or SART, received a rural grant in November 2013 to form a satellite office from Williston in Watford City. The team officially began in February 2014 and brings together representatives of local law enforcement, health care, victim advocates and the county’s state’s attorney’s office.
“Because the focus of this rural grant money coming to Family Crisis Shelter was on issues of sexual assault, we felt it was important to establish a sexual assault response team,” said Suzie Kramer-Brenna, outreach specialist for the North Dakota Council on Abused Women’s Services.
Services include forensic exams for assault victims, testing for sexually transmitted diseases and tending to their physical and emotional concerns, among other protocol.
Watford City is in a unique area, Kramer-Brenna said, as the region has been so heavily impacted by oil development.
Neighboring Williams County is right there too; in fact, sexual assaults more than quadrupled from six in 2012 to 27 this year, Bonnet said. McKenzie County had a similar number if not more last year, said Jennifer Winter, a victims advocate at Watford City’s Family Crisis Shelter.
“And that’s reported cases,” said Cheryl Faulkner, director of nursing for McKenzie County Healthcare Systems. “What about those people out there that haven’t reported?”
Winter said domestic violence reports can come after years of abuse while other victims may not report abuse by a stranger because of possible embarrassment.
Nationally, one in six women and one in eight men are sexually assaulted at some point in their lives, Kramer-Brenna said.
“Statistically, a majority of them are not reporting,” she added.
Men are especially reluctant to report, Winter said.
“They’ll even tell you this is so emasculating,” she said.
Most male-on-male sexual assault perpetrators are heterosexual men, Kramer-Brenna said.
Victims are largely referred to the SART through law enforcement, though the clerk of court and hospital have also referred survivors, Winter said.
“There’s a multitude of avenues,” Bonnet added.
Despite the slowdown in oil production, sexual assault numbers are still up, Winter said, recounting a conversation with Watford City Police Chief Art Walgren who said fast money and alcohol fueled the crime while now “it’s desperation.”
“The numbers are still up even though we’ve had a mass exodus,” Winter said, adding the Dakota Access Pipeline has “brought an uptick again.”
Not every assault is prosecuted, McKenzie County State’s Attorney Jake Rodenbiker said, adding some victims choose not to participate in prosecution due to the intimate and personal violations they experienced.
“It really is a case-by-case analysis,” he said.
“It is a small minority of cases that are reported, and then out of those reported cases again, a very small percentage that go on to trial and we might see a conviction,” Kramer-Brenna said, adding victim blaming and degrading parts of prosecution can keep victims reluctant to come forward or report.
For its part, McKenzie County SART is set up to provide collaborative services for those victims.
“Everybody has a special place on this team,” Faulkner said.
The 12-member team also includes Nikki Winter of Watford City’s Family Crisis Shelter; Carley Axdahl, a victim witness coordinator for the State’s Attorney’s office; Walgren and Jesse Wellen of Watford City Police; McKenzie County Sheriff Gary Schwartzenberger; Ashley Saylor, public health nurse for the Upper Missouri District Health Unit; Tisha Scheuer, director of Central Dakota Forensic Nurse Examiners; and Desiree Sorenson, McKenzie County social services director. The team meets monthly.