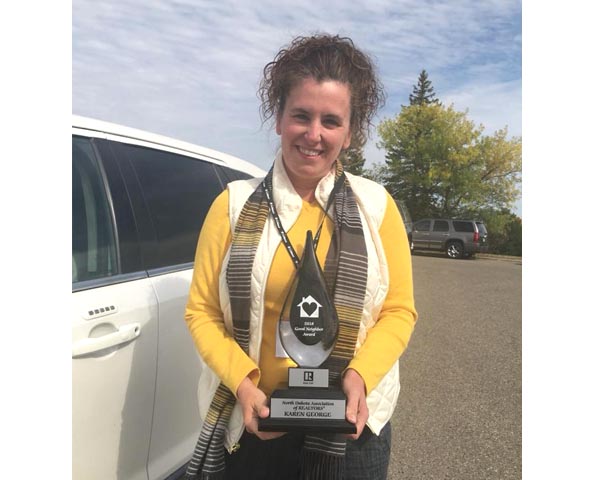 Karen George of Watford City recently won the 2018 Good Neighbor Award of the Year given by the North Dakota Association of Realtors.
The award has been presented to a North Dakota realtor every other year at a 2-state convention for North Dakota and South Dakota.
In order to qualify for the award, realtors must be in good standing, as well as a primary member of the North Dakota Association of Realtors.
Mary Gumke, executive director of the Watford City Area Chamber of Commerce wrote a nomination letter for George.
According to Gumke, at a Chamber Annual Meeting in April, Karen was having a conversation with the Lt. Governor’s wife, Sandi Sanford, talking about how George didn’t expect to settle in Watford City and how much her life has changed ever since.
“After speaking to Karen, Sandi came up to me saying everyone needs to know Karen’s story,” says Gumke, referring to her inspiring story of becoming an active community member.
“They heard of everything I’ve done within Watford City and reached out to me,” says George. “I hadn’t even had my realtor’s license for 100 days. It’s not something I was expecting!”