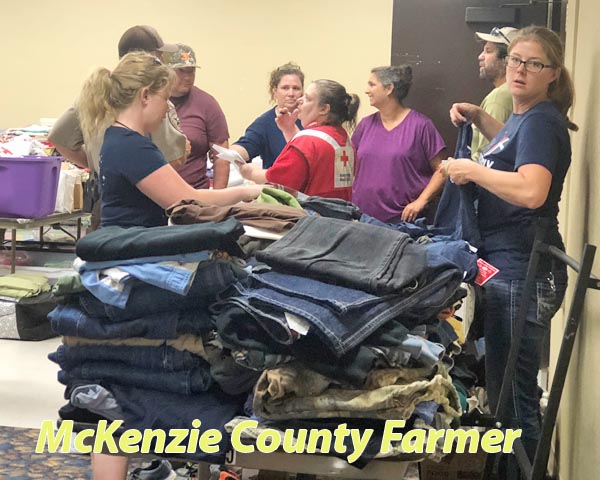 Moments after the EF2 tornado hit the Prairie View RV Park in the early morning hours of Tuesday, July 10, McKenzie County EMTs, law enforcement, and concerned friends rushed in to help. As the hours passed, local aid organizations, the Red Cross and hundreds of local citizens set up to begin assessing the needs of those affected and finding their displaced neighbors a place to take refuge.
First on the scene was the area’s first responders.
“I was in the third ambulance to arrive on scene,” said EMT Teri Nicholson. “The back door opened and I tried to assess what was around me as rain beat down on us.”
Nicholson said that she saw hanging power lines and could only see the destruction that was lit up in front of her. Not totally confident in her own safety, Nicholson started assessing the victims of the tornado around her.
“Yes it would be scary if I stopped and thought about it,” Nicholson continued. “But, it is our job. Each responder did what they were trained to do - the fire department, the EMTs, and the law enforcement. It was like beautiful choreography watching the responders take care of the crisis.”
As the sun rose on Tuesday morning, residents who were not affected by the tornado started to realize what had happened in their community, and hundreds went to work figuring out what they could do.
Some people went to the store and bought cases of water, others went through their closets to find clothing for those who fled their homes.