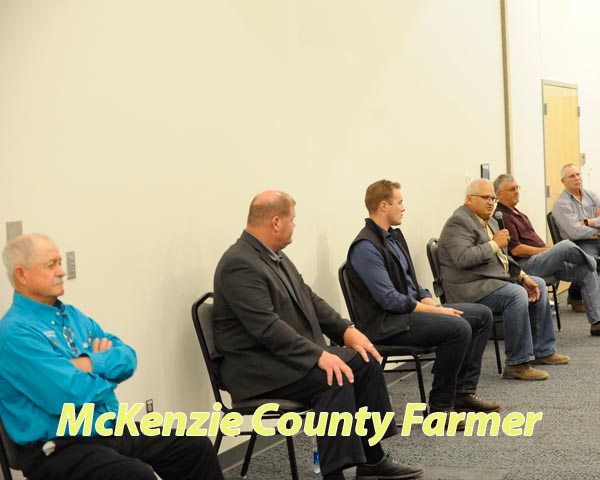 McKenzie County voters got their first chance to hear from Joel Brown, Craig Hystad, Tom McCabe, Jeremy Olson, Wayne Olson and Clint Wold, the six candidates who are running for the three open seats on the McKenzie Board of County Commissioners during a public forum on Tuesday, Sept. 22.
Not surprisingly, all six candidates believed that the critical issues facing the county in the future are continuing to build and maintain the county’s road system, maintaining the county’s share of the Gross Production Tax (GPT) which the county receives from oil production that is critical, and exercising fiscal responsibility.
When asked how to balance the needs across the county, Craig Hystad, a farmer and rancher who lives in Arnegard and has over 30 years of experience working in the oil industry, and Clint Wold of Arnegard, who retired after 40 years in the oilfield, both said they think that more of the county’s money should be spent around the county, not just in Watford City, but around the county.
“Watford City gets most of the money,” stated Hystad. “It’s the hub city, but we’ve got to help all of the people in the county.”