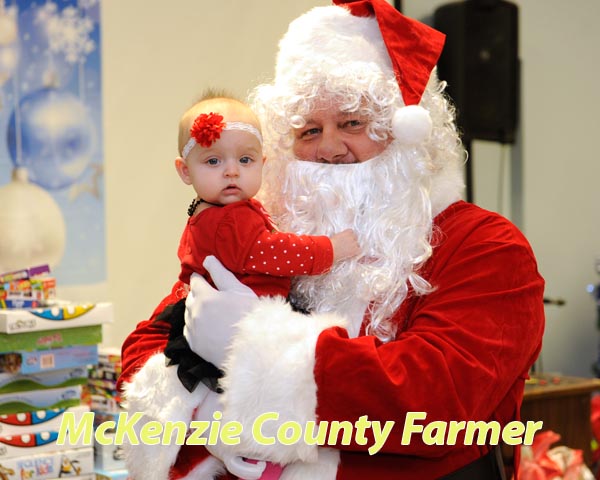 Christmas came early for many area families as hundreds of children and their parents streamed into the Watford City Eagles Club on Saturday, Dec. 19, as the Eagles Auxiliary hosted its annual Giving Tree event.
“This is the biggest turnout we’ve ever had,” says Claudia Fegert, Eagles Auxiliary past president. “We ended up with about 219 children.”
Every year, the organization collaborates with the community while also using its own funds to bring a magical Christmas to those that otherwise may not have one.
“A lot of the little kids really enjoyed it,” Fegert says.
As children had the opportunity to visit with Santa last Saturday, they received toys from their wish list, food and toiletry baskets, as well as hygiene kits.
“We were able to feed them and fill them up with food, toiletries and toys,” Fegert says.
This year, the organization received a tremendous amount of support from the community, Fegert says.
“The community was very, very generous,” she says.
The generosity provided by the community, along with the help extended by auxiliary members made the impossible, well, possible.
“We had a lot of younger people that stepped up this year,” Fegert says.
According to Fegert, the community deserves an overwhelming round of applause for their outstanding support.
“It was very, very wonderful,” she says.