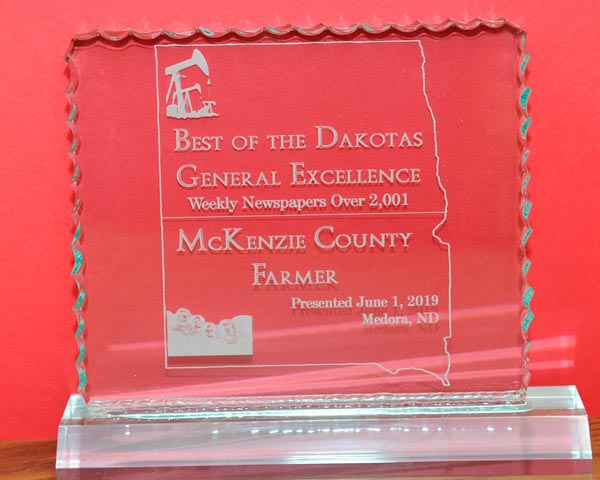 The McKenzie County Farmer received a record number of 48 awards in news reporting, advertising and photography during the 133rd Annual North Dakota Newspaper Convention, which was held May 30 - June 1, in Medora.
Included in the awards was the Farmer being selected as the “Best of the Dakotas” in competition  among the largest weekly newspapers in North and South Dakota.
The judges in making the selection, wrote of the McKenzie County Farmer, “The cleanly designed pages of this newspaper are brimming with local news, stories and ads. Obviously a hard-working staff putting out a first-rate publication.”
In addition to the “Best of the Dakotas” award, the Farmer also received a second place for General Excellence, an Honorable Mention for Front Page Design and Overall Design Excellence.
Overall, the McKenzie County Farmer received 17 first place awards, 10 second place awards, 13 third place awards, and six Honorable Mentions.