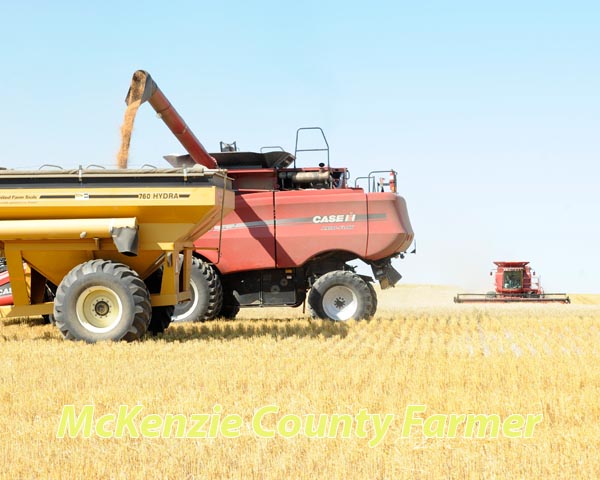 So far it hasn’t been the harvest season that Clayton Monsen nor any of the farmers in McKenzie County was hoping it would be.
In most years, farmers across the county would have been wrapping up their wheat harvest by the Labor Day weekend. But Monsen says that all of the rains that fell across the county in August have really put the dampener on this year’s harvest.
“We were able to cut on the 8th and 9th of August and then the rains started,” stated Monsen, who along with son, Ryan, farms south of Arnegard. “We got started again on the 16th and then got rained out again.”
According to Monsen, in the last two weeks, they have only had their combines running four days.
And the delay on getting this year’s durum and wheat crop into the bins isn’t the only thing that weighs on Monsen’s mind as he wonders when the next spell of hot, dry weather will arrive.
“Nine times out of 10 we’re done by Labor Day,” states Monsen. “This year we hope to be done with our wheat by Sept. 15.”
In a normally dry month, so far over 1.5 inches of rain have fallen in McKenzie County. And the almost daily showers, along with high morning humidity is keeping the combines idled.
“In addition to the rains, we’re battling with dew in the mornings and high humidity in the evening,” states Monsen. “That means, on a good day, we can only combine from about 1 to 10 p.m.”