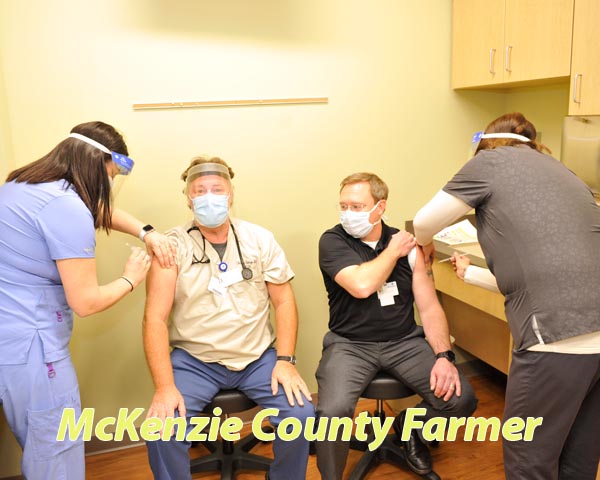 “It’s a vaccine of hope,” stated Cheryl Faulker, McKenzie County Hospital director of nursing, as she waited to receive her injection of the Moderna vaccine. “It’s awesome that it’s here.”
Faulkner, along with other healthcare workers, lined the entrance of the McKenzie County Clinic cheering as the facility received its 200 doses of the cornonavirus vaccine on Tuesday, Dec. 22.
“I was the first healthcare system employee who tested positive for the virus last May,” states Faulkner. “I was one of the people that didn’t have any symptoms.”
According to Mike Curtis, McKenzie County Healthcare Systems, Inc. executive director/CAO, the vaccine arrived at 1 p.m. last Tuesday. And by 2:15 p.m. they had begun administering the vaccine to healthcare workers and emergency responders.
“We did 23 vaccinations the first day and continued to vaccinate others in the following days,” stated Curtis. “We did it on a staggered basis in order to minimize the effect of potential side effects. We don’t want to give it to an entire department at the same time and then have them develop adverse side effects.”
Curtis says that the first rollout for the vaccine will be to willing healthcare systems staff, emergency responders and to residents of the Good Shepherd Nursing Home.