Help for the holidays 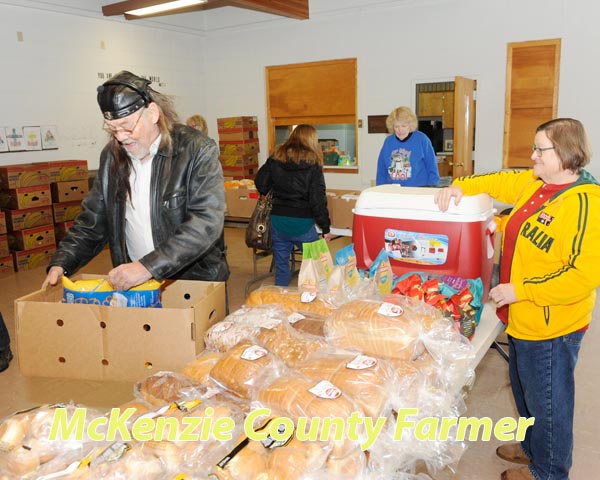 There was a steady line of people streaming through the doors of the First Presbyterian Church in Watford City last Tuesday as they picked up much needed food items during the McKenzie County Food Pantry’s weekly food give-away.
“We don’t like to see people go hungry, you know,” says Kay O’Connor, who manages the food pantry.
In addition, O’Connor says that this year, as in the past, the food pantry will be preparing Christmas boxes containing potatoes, dressing, green beans, a can of cream of mushroom soup, chicken broth, a selection of meat, as well as cranberries, pineapple and an extra box of cereal for those needing help during the holidays.
Originally from Michigan, O’Connor has lived in Watford City since the mid-80s and didn’t become  involved with the food pantry until 2012.
“It was becoming too much and the food pantry was becoming too demanding,” says O’Connor, who then retired from her part-time job and jumped on board to help save the food pantry.
“People come to town and you hear their stories and you just feel so bad for them,” O’Connor says. “I try to direct them to where they need to go if they need money for gas or something.”