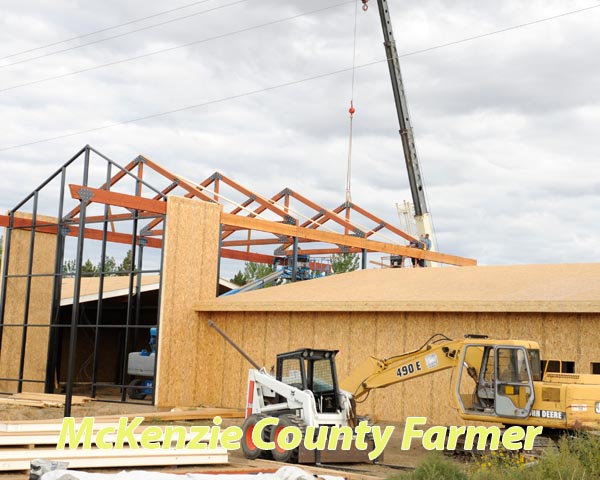 “We weren’t sure what to do next because of the wind,” laughed LeRoy Lillibridge, McKenzie County Heritage Park board director as high winds last week briefly delayed construction of the new visitor center at the McKenzie County Heritage Park.
As helmets went flying, the strong gusts of wind were nothing new for longtime North Dakotans like Lillibridge, who is happy to be back to work on completing the outside of the visitor center after COVID-19 put the world on pause earlier this year.
“Working from 7 a.m. to 5 p.m. is a long day for an old bird like me,” laughs Lillibridge.
It’s a long day for all four men who have taken on the job of completing the outside of the visitor center.
“It’s me, Tex Stevenson and two workers who we pay hourly,” says Lillibridge.
As Lillibridge and Stevenson began shopping for contractors to build the visitor center, the estimates they received quickly forced them to change their hiring plans.
“They wanted around $88,800,” says Lillibridge. “And the guy from the panel company just had so many demands.”
As Lillibridge began weighing the cost of hiring a contractor, he came across several do-it-yourself videos.
“We looked at those videos and thought how easy is it. So we started doing it ourselves,” says Lillibridge.
While Lillibridge says the men ran into some little hiccups along the way, it made for an easier and quicker job to complete the west wing.