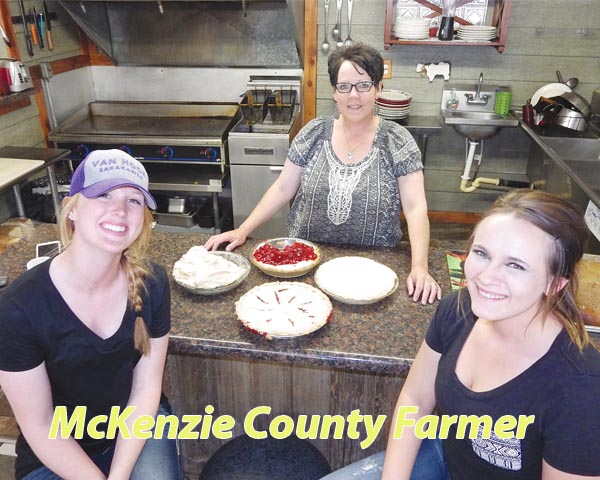 (Editor’s note: This is part two of six in a series profiling community members of McKenzie County’s smaller towns.)

If you’ve been to Keene, N.D., chances are you have stopped by Dixie’s Cafe for a piece of pie or a hamburger. The cafe’s owner, Dixie Brown, is an optimistic, no-nonsense staple of the Keene community and has infused the cafe with her personality.
In 2000, Brown was a young mother living down the road from her childhood home in Keene. After working for many years in Watford City, she had just decided to stay home with her two children when her husband passed away.
“Everything changed then,” remembers Brown. “But my mom wouldn’t let me sit on the couch forever. She told me to get up and figure out what to do next.”
Having worked at the Chuck Wagon in Watford City for many years, Brown was familiar with running a kitchen. There was a restaurant in Keene that had been empty for a few years and she got the idea to buy it and turn it into a cafe. Dixie’s Cafe was born and quickly became a regular place to stop for food, a chat and a card game.
Dixie’s Cafe is a reflection of Dixie Brown herself. Greeted with a “Thou Shalt Not Whine” sign hanging above the kitchen, customers regularly push tables together and get a communal game of gin or whist started. Brown often jumps in to play between orders.