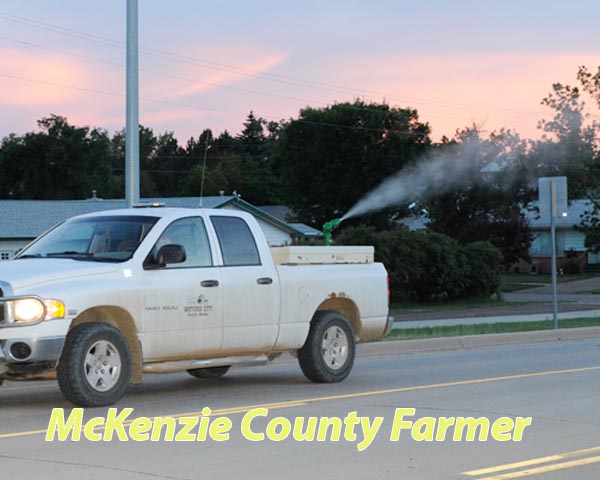 If Watford City residents have so far this summer been able to enjoy spending time in their yards or at the city parks without applying a generous coating of mosquito repellent, they can thank the efforts of the Watford City Vector Control.
Working unseen from the public’s eyes, Justin Smith, Watford City Public Works director, says that the Vector Control started applying larvicide in known mosquito breeding areas around Watford City and within the boundaries of its extraterritorial area (ETA) the beginning of April.
“The goal of applying the larvicide in those low-lying wet areas or other known mosquito breeding areas is to prevent mosquitoes from hatching,” states Smith. “The larvicide that we use has a 60 to 90 day kill period so it is pretty effective.”
According to Smith, the city’s Vector Control, which operates with a budget of just under $100,000, covers between 18 and 20 squares including the city limits and the ETA.
Preventing mosquitoes from hatching and becoming the blood-sucking  adults that send the public running for repellent is just the first of a two-prong approach the Vector Control uses to try to keep the mosquito numbers in check.
The second phase, according to Smith, is when the city begins fogging within city limits to actively kill adult mosquitoes.