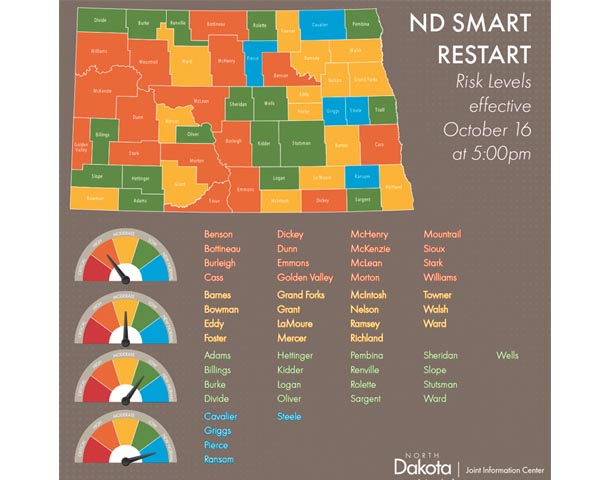 As the number of active COVID-19 cases continued to increase across the state, on Wednesday, Oct. 14, North Dakota Gov. Doug Burgum moved 16 counties, including McKenzie County, into the high-risk (orange) level, which now recommends reduced occupancy rather than business closures. At the same time, nine other counties were moved from low risk to moderate risk, and two others moved from the new normal to low risk.
The governor noted that on Oct. 14, the state saw an increase of 713 positive cases for the virus bringing North Dakota’s active case count to 4,759, while the state’s death toll associated with COVID-19 increased to 365.
While the governor stated that at the beginning of the pandemic, the state navigated a course that worked for North Dakota.
“We’ve empowered our schools to reopen this fall,” stated Burgum. “We’ve protected our freedoms while supporting business and industry.”