Officers dare students to stay away from drugs 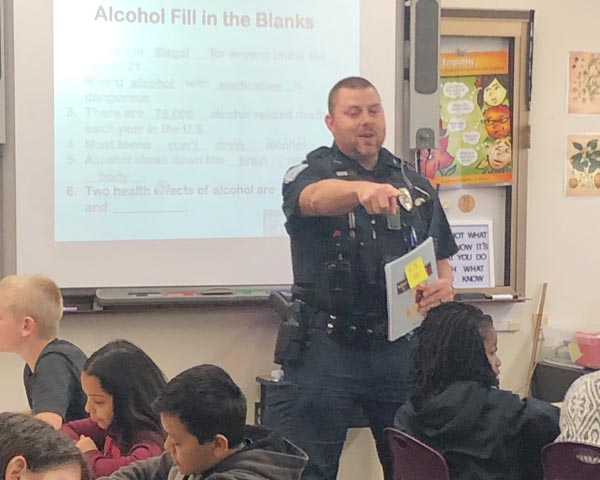 “Ewww, wrinkles? I don’t know anyone who wants those,” said Sgt. Jeff Jensen as he disgustedly scrunched his face while talking to a classroom of children at Watford City Intermediate School (W.C.I.S.) on the long-term effects of smoking cigarettes.
The 5th grade students of W.C.I.S. recently kicked off their 16 week-long D.A.R.E. program presented by Sgt. Jensen and Officer Andy Schatz, Student Resource Officers (SRO) of the Watford City Police Department.
Brad Foss, Watford City Intermediate School principal, is on board with the D.A.R.E. program’s initiative because he feels children are beginning to get bombarded with the pressure to turn to drugs and alcohol at an earlier age.
“What we want to teach them is better decision-making so that they aren’t having to rely on coping skills later in life,” Foss says. “That’s the big thing we are trying to accomplish.”
The main purpose of the D.A.R.E. program is to teach children the repercussions of drug and alcohol use while there’s still time before it’s too late for the message to sink in.
“There’s a reason we start talking to them at the 5th grade level,” Jensen says. “It’s this grade level that kids are starting to become more and more susceptible to using drugs and alcohol.”