ONEOK has invested $10 billion in the Bakken in 12 years 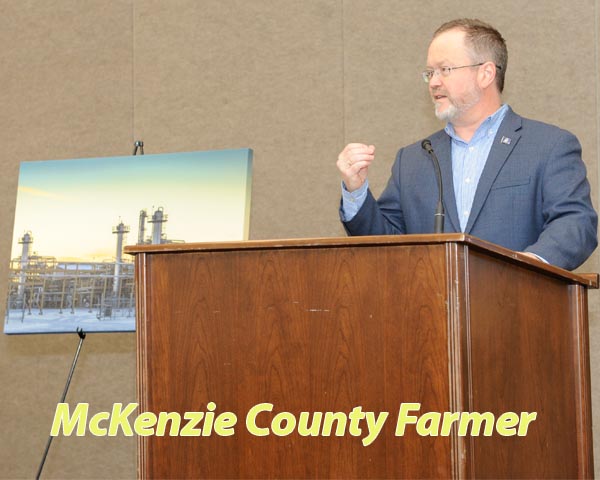 Putting out the natural gas flares that are lighting up the sky in McKenzie County, as well as throughout the Bakken, has long been the goal of not only the North Dakota Industrial Commission, but also the midstream companies that are plowing in hundreds of miles of pipelines and investing billions of dollars in gas processing plants and compressor stations to bring this commodity to market.
And one midstream company, ONEOK, which has been at the forefront of reducing natural gas flares, celebrated the opening of their new Demicks Lake Gas Plant and the Elk Creek Pipeline before a crowd of state and local officials at Watford City’s Rough Rider Center on  Thursday, Jan. 30.
“We have made north of $10 billion in investments and now have a processing capacity of 1.4 billion cubic feet of natural gas per day,” stated Kevin Burdick, ONEOK executive vice president and chief operating officer. “We’re going to continue to be here and we’re continuing to grow.”
Since first moving into the Bakken region in 2008 when ONEOK opened the Grasslands Plant in Sidney, Mont., their footprint in McKenzie County has grown exponentially.
In the past 12 years, ONEOK has opened five natural gas plants in McKenzie County - the Garden I, II and III, Lonesome Creek and Demicks Lake I, with a sixth plant - the Demicks Lake II coming online in the next two months. In addition to those plants and the recently completed 900-mile Elk Creek Pipeline, Burdick said the company has completed the construction of four large compressor stations with plans to build six more.