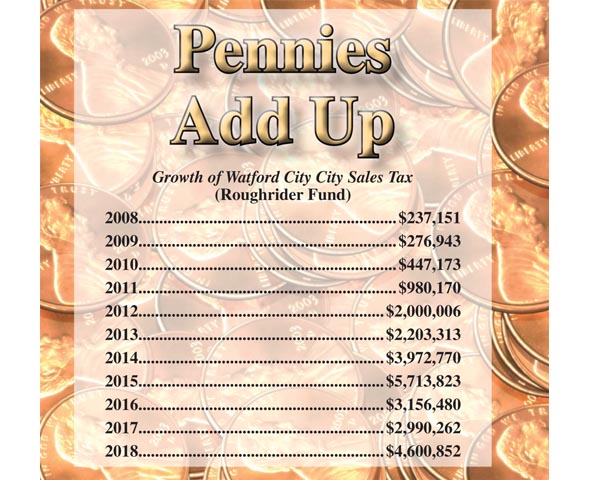 After two years of seeing declining revenues, thanks to increased sales activity in the city, the city’s Roughrider Fund is now bouncing back. And for Matt Beard, Roughrider Fund chairman, the increased funding could open the doors for the funding of new projects in Watford City.
According to Beard, the Roughrider Fund, which obtains it funds from the city’s 1.5 percent sales tax, has helped finance many community projects over the years including the Connie Wold Wellness Center, the Children’s Playground, Wolf Run Village and the Wolf Pup Daycare, as well as the McKenzie County Multi-Purpose Building, and the McKenzie County Veterans Memorial Building. More recently, the fund has made significant contributions toward the debt financing of the new Rough Rider Center and the new McKenzie County Healthcare Systems, Inc. medical complex.
“Back in 2015, when the Roughrider Fund took in a record $5,713,823, the decision was made to use 50 percent of the fund’s revenues to pay the debt of the new Rough Rider Center, as well as 13 percent, plus an additional $50,000 per month, to the healthcare system for their new facility,” states Beard. “In addition, the committee has been contributing $250,000 annually to the Wolf Pup Daycare to help service its debt.”
When the money was flowing in, Beard says that the committee had no trouble meeting its commitments. But then in 2016 and 2017, with falling revenues, the decision was made to quit funding new projects.