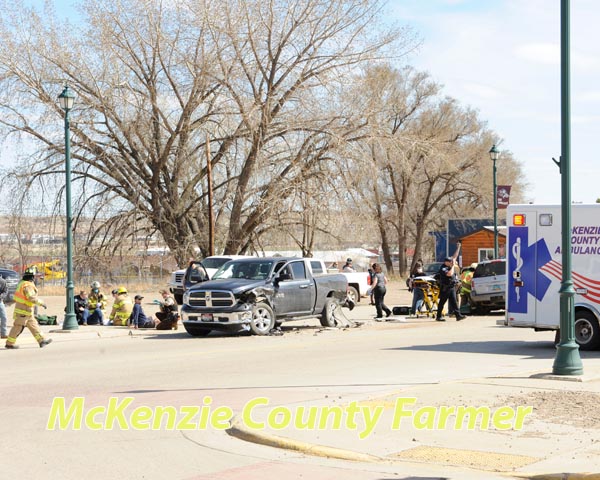 Three people were injured, one seriously, in a three-vehicle accident on Watford City’s Main Street on Wednesday, April 29.
According to the Watford City Police Department, at approximately 3:57 p.m., Dawn Loomer, 55, of Watford City suffered a medical emergency while driving south on Main Street in a 2005 Mercury Mountainer.
Loomer passed through the intersection of Main Street and Park Avenue where her vehicle crossed the center line and crashed into a 2017 Ram 1500 pickup driven by Donald Eugene Conradi, 59, of Watford City. Loomer’s vehicle then proceeded south striking a second pickup, a 2017 GMC Sierra, driven by Nicholas Adam Brewton, 37, of Watford City, before coming to a stop.
Loomer suffered severe injuries as a result of the crash and was transported to the McKenzie County Hospital. She was then transferred to a Bismarck hospital where she is in  severe, but stable condition.