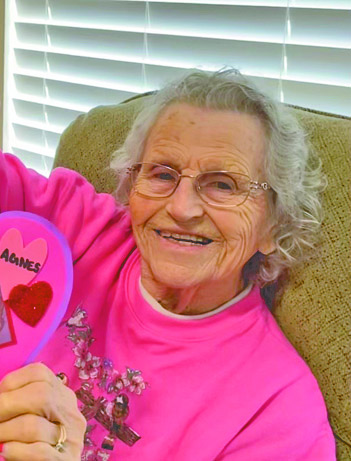 Agnes Mae (Stashuk) Murray, passed away peacefully at her home in Des Moines, Wash., surrounded by her loved ones on Jan. 10, 2023.
Agnes was born on Dec. 27, 1929, in Grassy Butte, N.D., to Zena and John Stashuk. Agnes’ siblings included Rose Burton, Joseph Stashuk, Merle Daley, Violet Vick, Victor Stashuk, Lily Miller, Frank Trout, Roger Trout, Larry Trout, Joseph Trout and Lawrence Trout.
Agnes left North Dakota in 1947 and moved to Quincy, Wash., with her sister Rose and her brother - in - law Burton, then eventually onto Seattle, where she worked at Manning’s Café in West Seattle and met her future husband Bob, they married Oct. 14, 1950, and resided in West Seattle and started a family. After several moves to accommodate Bob’s career they eventually resided in Burien, Wash., where they opened a restaurant named Chicken Delight and ran it together for several years, closing in 1970 when Bob then went to work for the state of Washington and Agnes at the Red Lion Hotel.
In their retirement years they traveled extensively as time and new grandchildren permitted. Bob was block watch captain and a member of the American Legion; Agnes was busy volunteering with the American Legion Auxiliary.
In 2009, they made one more move to the Huntington Park Retirement Community in Des Moines, Wash., where she loved walking Bobo, her grand-puppy, talking to neighbors and baking treats. She had many hobbies including sewing quilts, creating photo albums and scrapbooks.
Agnes is preceded in death by her loving husband of 60 years, Robert Brown Murray; her children, Robert Michael Murray (Ruth), Carol Harpole (Edward), Joanne Paquette, Patrick Murray (Wendy), Thomas Murray (Carryl); along with 19 grandchildren; and 36 great-grandchildren; and numerous nieces and nephews.
A memorial service will be held at the Huntington Park Clubhouse on Jan. 28, 2023, from 2 - 4 p.m. and private graveside burial on Jan. 30, at Forest Lawn Cemetery in West Seattle.