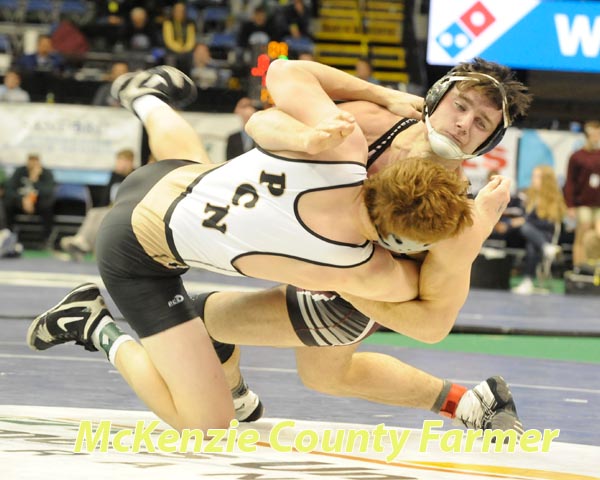 The Watford City wrestling team made the best of their final year of competing at the Class B level at the State Wrestling Tournament in Fargo on Feb. 15-17 as the Wolves placed five of their eight qualifying wrestlers en route to a 10th place team finish.
“Our goal all season was to be a top-10 team in the state tournament,” stated Mitch Greenwood, Wolves’ head coach. “We finished just outside of the top 10 last year and had pretty much everyone coming back so we thought that was a realistic goal.”
The five state place finishers, led by 195-pound state champion Connor Dennis, along with a pair of non-place winners, netted the Wolves 74 team points to finish in 10th place out of the 34 Class B teams competing in this year’s state meet.
The other goal that the Wolves had was to end their final Class B season with a state champion. And Connor Dennis secured that goal for Watford City as he capped off his senior year of wrestling with a state title at 195 pounds by decisively defeating Pembina County North’s Carter Brown, 10-4.