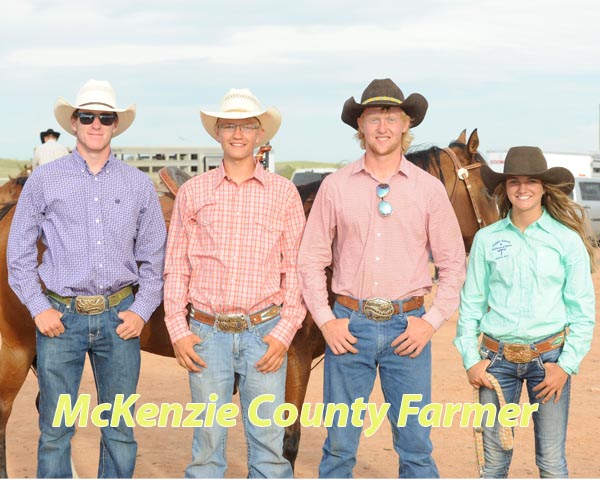 Ask anyone of them what they’re looking forward to, and they’ll all say they just want to do well.
Nevada Berquist, Justin Dahl, Abby Hepper and Seth Indergard are all bound for the National High School Finals Rodeo set for July 17-23 in Gillette, Wyo. The McKenzie County teens will compete in their different events with 1,500 other high schoolers from 41 states, five Canadian provinces and Australia.
Berquist, heading into his sophomore year at Watford City High School, just came off a state championship win in team roping.
He started roping at age 3 and started doing it from a horse at 8. From there, he kept progressing.
Berquist made the junior high finals in 2013 and 2014, and the 14-year-old will compete in team roping this year, which he said he hopes to win.
“That’d be good,” he said.
Berquist will continue rodeoing, he added, and hopes to go pro one day.
“I got a PRCA permit for winning state this year so when I turn 18, I just buy my card and I can pro-rodeo,” he said.
Dahl said he too hopes to go pro one day, as “Rodeo’s become a lifestyle for me. It’s not really a sport.”
He will compete in steer wrestling in Gillette, an event his uncle led him toward. Dahl’s father is a roughstock rider while his mother’s family rodeos too.
Steer wrestling was the beginning of something great, he said.
“I’ve been hooked ever since,” the 17-year-old said. “Nothing gave me that kind of rush like bailing off a horse going that fast.”
Dahl added he hopes to rodeo as long as he can in addition to farming and ranching in the future and getting into horse chiropractics.
Teaching and helping out fellow contestants is part of the fun too, he said, as will be meeting people in Gillette.
“They become family to you more than friends,” Dahl said. “It’s a really good place to be involved.”
Six miles down the road from Dahl near Keene is Hepper, who heads to nationals in barrel racing. She’s competed at state for barrels, breakaway rope and pole bending too, rodeoing since she was about 6.
“I really liked it and I got more into it and I got a different horse and I’ve just stuck with it,” she said.
Hepper said she hopes to make it back for the short go in the top 20 in barrel racing.
“That’s the best of the best,” she said. “It’d be cool to make it to that.”
Gillette isn’t Hepper’s only rodeo this summer, she said, as she’ll be competing in the North Dakota Rodeo Association and Roughrider rodeos and high school rodeoing starts in August.
“It’s pretty much all I do in the summer,” she said. “People go to the lake, but I’m all gone every weekend for rodeo.”
Hepper said she too would like to pro-rodeo someday, but for now, she hopes the group does well in Wyoming.
“It’s gong to be tough competition but you’ve got to bring your A-game for sure,” she said.
Seth Indergard, 19, said practice is important too. He’s up for team roping in Gillette.
Indergard grew up west of Watford City and graduated from Watford City High School this spring.
“I just want to do good,” he said. “Been there twice before.”
Indergard went as a freshman for team roping, and then again as a junior for team roping and steer wrestling.
“It’s just fun,” he said.
Indergard will also show a steer at the Richland County Fair this summer and attend college orientation. He is attending Montana State in Bozeman for agricultural business.