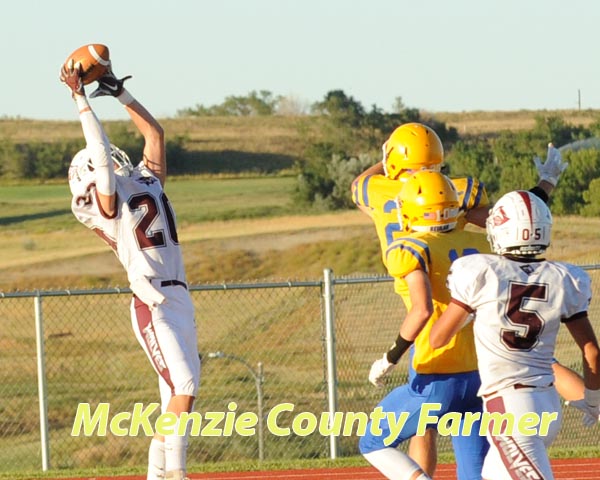 Watford City proved to be no match for Beulah, the 2019 AA State runners-up, as the Miners rolled over the Wolves, 50-20, on Friday, Aug. 28, to open the 2020 football season.
“Playing the 2019 AA State runners-up proved to be a tough test,” stated Justin Johnsrud, Wolves head coach. “We knew it would be. They have a strong team and it is very hard to prepare for their offense and defensively, we were really just out-muscled.”
Beulah would score first in the lopsided win as it took them just three plays to reach the end zone during their first possession.
Watford City would answer right back as Izaak Boekelman would connect with Jason Hogue on a nine-yard pass to deadlock the game, 7-7, midway through the first quarter. But two quick touchdowns by the Miners to close out the first quarter set the tone for the remainder of the game.
A six-yard touchdown pass from Boekelman to Rylee Boomer would get the Wolves on the scoreboard to open the second quarter, but the Miners would tack on two touchdowns in that stanza to take a 36-13 halftime lead.
Beulah would score their final two touchdowns in the third quarter, while Watford City’s final touchdown came in the fourth quarter on a 29-yard run by Dakota Cluchie.
Offensively, we were able to move the ball, but some key turnovers really set us back,” stated Johnsrud. “You are not going to win very many games, at any level, when you turn the ball over five times.”