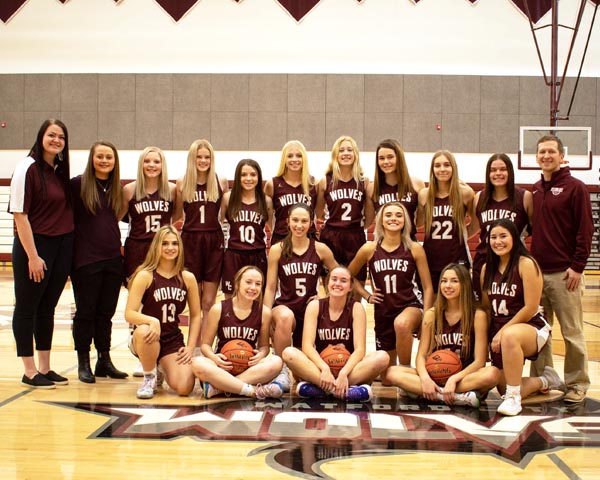 The 2021-22 girls basketball season came to an end for Watford City on Friday, March 4, as the Wolves fell to Jamestown in loser-out action of the WDA Tournament. With the loss, Watford City ended the season with a 4-14 record in the WDA and a 6-17 overall record.
The Wolves opened the WDA Tournament with a 66-44 loss to undefeated Bismarck Century.
Two Watford City players, Madison Spacher and Jessie Mogen were named to the All-WDA Team.
Heading into the WDA Tournament, Spacher, a 5’11” senior forward, was the fourth highest scorer in the WDA scoring 371 points, making 140 of her 313 shots for 45 percent from the field and was good on 73 of her 102 free-throw attempts. She was sixth highest in the WDA with 66 assists.
Mogen, a 5’9” sophomore forward, was the ninth highest scorer in the WDA with 314 points in the regular season as she netted 314 points connecting on 116 of her 313 shots from the field, while hitting on 75 of her 112 free-throw attempts. During the season, she had 163 rebounds, the seventh highest in the WDA, and had 66 assists, the sixth highest in the conference, and 22 blocks, the sixth highest in the WDA.