Wolves punch their ticket to State A Tournament 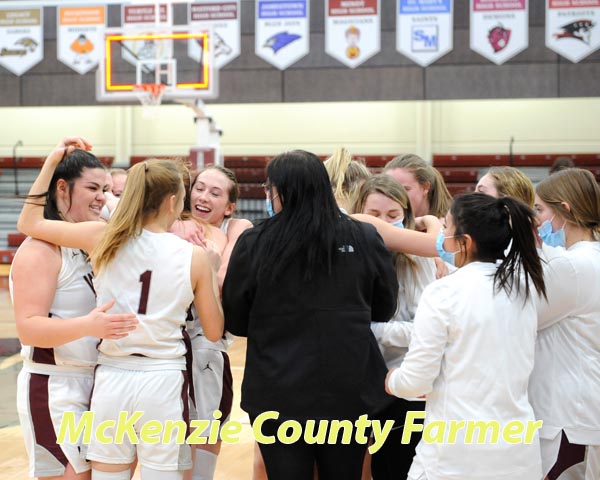 Watford City’s girls basketball team made history last week as the Wolves punched their ticket to the State Class A Tournament for the first time in the school’s history. The crowning moment for the Wolves’ basketball program, which moved to the Class A ranks just three years ago, came on Thursday, March 4, when Watford City downed Mandan, 65-61, in semifinal action of the WDA Tournament.
Watford City, which hosted the first two rounds of the tournament, bested Minot, 82-63, on Tuesday, March 2.
With the two wins, the Wolves, who were the No. 2 seed in the tournament, traveled to Bismarck on Saturday, March 6, where they were defeated, 74-53, by the undefeated Century Patriots.
In opening round action of the State Class A Tournament, the Wolves will take on Grand Forks Red River, the No. 3 team from the EDA, at 2:30 p.m. on Friday, March 12.
Due to changes in the Class A State Tournament format this year, once a team loses a game it is eliminated from further play.
If Watford City wins against Red River, they would take on the winner of the Fargo Davies vs. Jamestown game at 1 p.m. on Saturday. And if Watford City would win that game, they would play in the championship game at 1 p.m. on Sunday, March 14.