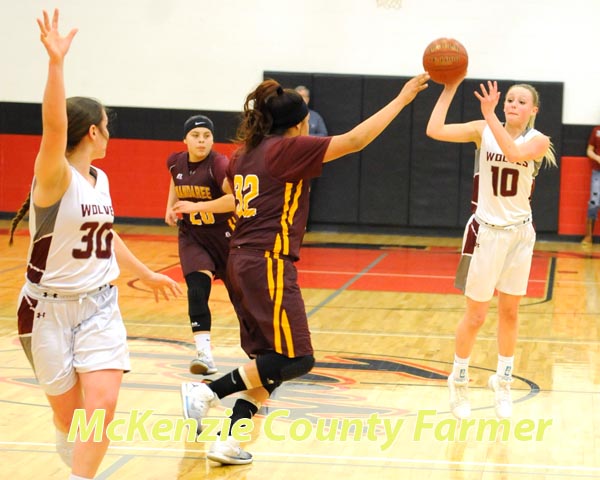 The Watford City Wolves will be heading back to the State Class B Girls Basketball Tournament for the third straight year and for the 16th time as they defeated Mandaree, 81-67, in the Region 8 championship game on Thursday, Feb. 22.
The Wolves, who hold the record for the most appearances at the State Class B Tournament, made it to State for the first time in 1978 and then made return appearances in 1984, 1986, 1987, 1988, 1995, 1998, 2001, 2003, 2006, 2011, 2014, 2016 and 2017.
“The girls have put together two great weeks of tournament action,” stated Cary Veis, Watford City first-year head coach. “They have great heart and a never quit attitude which led them to this point and that will carry them to the state tournament.”
And for Avery Sundeen and Lindsay Peterson who were on the last two Watford City teams that made it to State, a return trip to the big show is something that they have wanted all season. And for the entire team, making it to State means a lot since this will be the last year that the Wolves will be competing at the Class B level as they move to Class A at the end of the season.
“That was the goal that we had set at the beginning of the season,” states Peterson, a 5’6” junior guard. “I think we have a good chance to go a long way at State.”