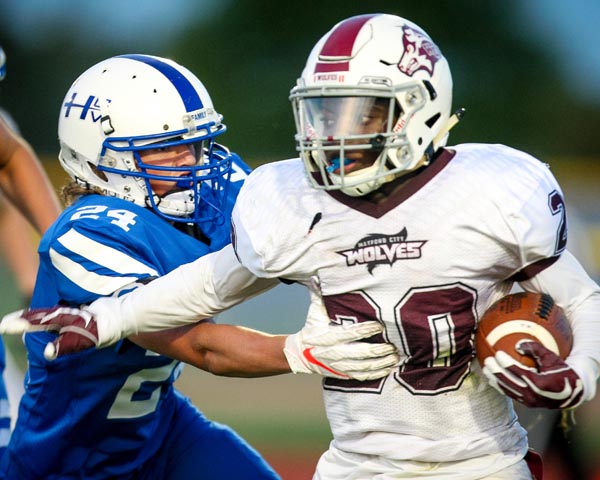 After going without a win last season, the Watford City varsity football team is off to a slow start as they dropped their first two games to Williston and Hillsboro.
The Wolves opened their 2019 season losing to Class AAA Williston, 0-41, and then losing to Hillsboro, 6-46, last Friday evening.
“The game against Williston was a tough one,” stated Justin Johnsrud, Wolves head coach. “In what you would expect by playing an opponent in the upper division, were physically out-matched at many positions. Williston had good size and strength and their skill positions had good speed.”
But in spite of the opening season loss, Johnsrud saw a lot of potential from his young team.
“Our skill positions are made up of mostly sophomores who were seeing their first varsity action against a good football team,” stated Johnsrud. “We saw some good things. Schemes were executed, but we just weren’t strong enough to block their defenders long enough.”
And this past Friday, the Wolves were no match to a very good Hillsboro team that was coming off a second place finish in the Class A division last season.
The Burros rattled off 32 unanswered points in the first quarter before holding a dominating 46-0 halftime lead.