A booming start to the 4th of July 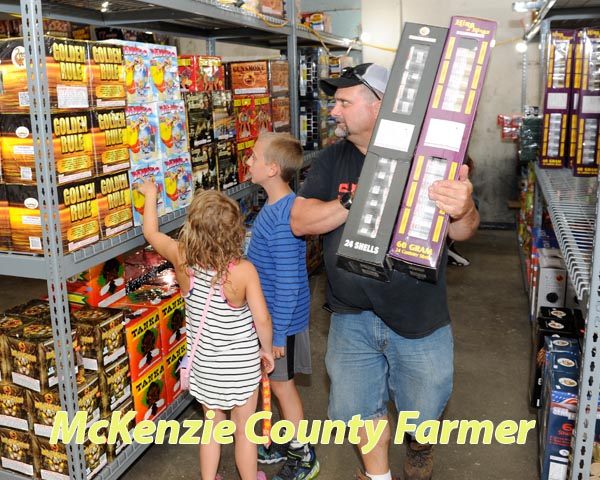 If the lines of people buying fireworks at the fireworks stands in Watford City are any indication, it looks like it is going to be a booming year.
“We’re right on track on what we have sold in the past,” states Tim Gaudreau, who owns Tim’s Fireworks. “We started selling fireworks this year on June 29 and the traffic has been pretty steady every day.”
Gaudreau, who has been selling fireworks in Watford City for the past 30 years, says that he enjoys seeing the same people come back to “the bus” year after year to see what’s new in the way of fireworks.
“It’s fun that people come in and remember me by name,” laughs Gaudreau as he rings up another sale. “It’s a lot like coming back home when we set up in Watford City.”
For Gaudreau, it is coming home. He and his wife lived in Watford City for several years before moving to Wyoming for his job in the oilfield.
“I may have left Watford City 21 years ago, but I still come back every year to sell fireworks and to see our family here.”
While Gaudreau’s fireworks stand sells everything from snaps to full blown displays, he says that he can’t keep the large displays on the shelf.
“We’re selling the large family displays as fast as we can put them in the bus,” states Gaudreau. “The 500 gram cakes are flying out the door.”