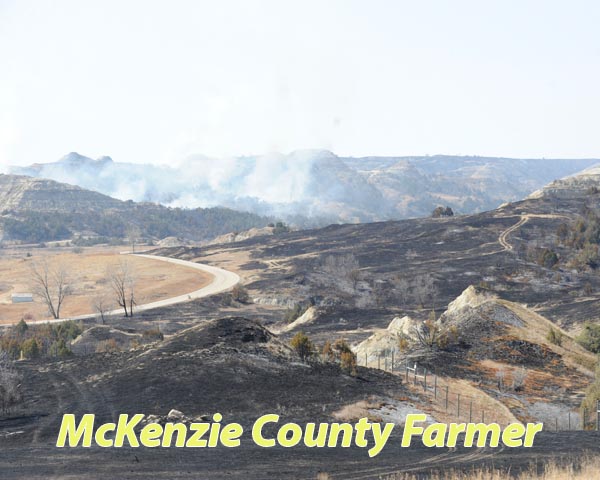 Seven days after it began, other than some minor flareups in the most rugged parts of the North Unit of the Theodore Roosevelt National Park, as of Friday, April 9, the Horse Pasture Fire has been over 70 percent contained. The fire, which started at 5 p.m. on Saturday, April 3, in the national grasslands before spreading into the national park has burned over 5,000 acres.
“It has been a very long week,” stated Dave Uhlich, Watford City Fire Department chief. “We had just finished fighting another grass fire when we were called out to this fire.”
Uhlich says that the Watford City Fire Department responded to the Horse Pasture Fire with six units and a dozen firemen before calling for mutual aid assistance from the Arnegard, Grassy Butte and Keene fire departments.
“It was an overwhelming fire. When we got there it was a very hot, fast-moving fire,” stated Uhlich. “We had units on the north side of the fire and were preventing it from crossing U.S. Highway 85. If it had crossed the highway, it would have gone into some very rugged country and we’d probably still be down there fighting it.”