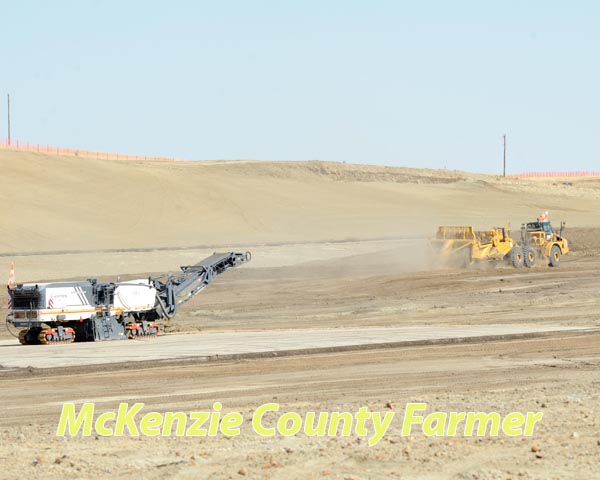 The Watford City Airport has officially closed its runway for all air traffic as it undergoes its second and final phase of the largest reconstructive makeover it has ever seen.
“We’re going from a 4,400-foot to a 6,550-foot runway,” says Luke Taylor, airport manager, of the $24.124 million project.
Old sections of the former runway could be seen spewing out of a multi-toothed milling machine last week as contractors did away with the old to make way for the new concrete runway.
“Our old runway was in bad shape and it needed major work,” says Taylor. “With the new runway, bigger and heavier airplanes are going to be able to land.”
Taylor says that the new runway, which will have a much higher weight-bearing capacity, will make it much safer.
“The new improvements will eliminate some of the penetrations to the runway protection zone,” he says. “It will allow our approaches to go down to a lower minimum.”
Taylor says that the project, which began last year, will include a new eight-inch concrete runway that will have a 5,800-foot operational capacity, as well as a parallel taxiway.
“The parallel taxiway will improve the efficiency of the runway and provide for safer airport operations,” Taylor says.
While the airport authority had considered utilizing a less thick concrete runway, Taylor says that the decision was made to go to the thicker runway because of the heavier corporate jets that utilize the airport.