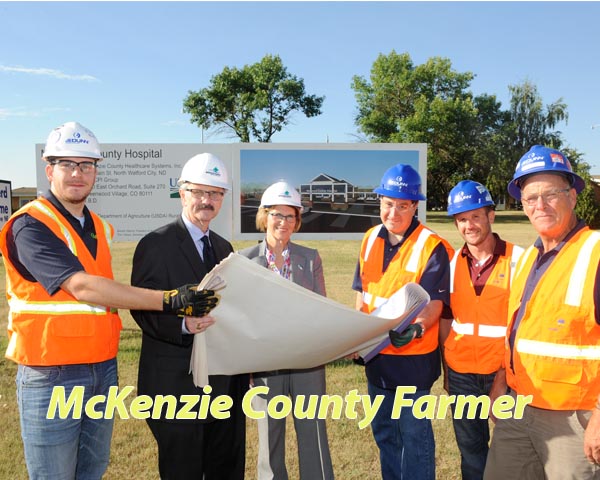 Nearly three years after the McKenzie County Healthcare System, Inc. announced that it would be constructing a new replacement healthcare facility in Watford City, construction of the new $75.4 million complex is finally set to begin this week.
According to Dan Kelly, McKenzie County Healthcare Systems, Inc. CEO, much of the delay in beginning construction of the new facility has been in finalizing its financing package. But with the announcement by the United States Department of Agriculture (USDA) of its approval of a $58 million loan, the project will now begin moving forward quickly.
“On July 22, we received the letter of commitment from Max Wax, Community Programs Director with the USDA,” stated Kelly. “With this  approval, we are finally ready to start construction.”
While the delay in receiving the USDA’s loan approval had stalled the start of construction, Kelly says that over the 40-year loan period, the healthcare system will save over $30.6 million in construction and loan repayment costs.
“In April of 2015, through value engineering, we brought the project cost down from $79,147,609 to $75,493,113, a reduction of $3,654,496,” stated Kelly. “But the biggest savings over the life of the loan came through lower interest rates.
According to Kelly, in 2015, the USDA’s interest rate was projected at four percent. However, since that time, the interest rate dropped to 2.75 percent, which will result in a savings of $20,660,252.11 over the life of the loan.
“We are at the start of something historic,” stated Patsy Levang, president of the MCHS board of trustees. “The new facility will change the landscape of healthcare in Watford City and McKenzie County.”
The new 120,000 square foot facility will bring the hospital, clinic and nursing home together in one local centralized location on the campus of the existing Good Shepherd Home. The existing hospital was constructed in 1952, while the nursing home was built in the 1960s.
The new hospital will be a 24-bed critical access facility and will have nine emergency room treatment bays, while new clinic space will provide for 12 exam rooms, as well as an additional 12 rooms for specialty clinics.
“We wanted a healthcare system that was owned and controlled by us locally,” stated Levang. “But we wanted to have good partners in providing a quality healthcare for the citizens of our county. We found that partner in Sanford Health, plus other regional healthcare providers.”
The significance of the project finally moving forward to construction phase wasn’t lost on the members of the healthcare system and JE Dunn Construction, project contractors when they met on the new building site on Monday, Aug. 1.
“No one gave up on us - neither the community nor the USDA” stated Levang on the long road to begin construction. “It took time, patience and everyone’s belief in us, as a healthcare system, and the value of this new facility and its importance to Watford City and McKenzie County.”
According to Levang, without the financial support from the USDA, the Bank of North Dakota and the people of McKenzie County, the project wouldn’t have been possible.
“The USDA stepped out in a big way that helped make this project possible,” stated Levang. “But so did the Bank of North Dakota, and citizens of McKenzie County, who have made significant donations to the new healthcare facility.”
As part of the project’s financing package, the Bank of North Dakota provided a $12.5 million low interest loan, while Watford City’s Roughrider Fund made a $9.5 million pledge to help pay for a portion of the annual debt service payments for the new structure.
“We will continue our local fund-raising efforts needed to help fund the new facility,” stated Levang. “We still need to raise $10 million in local funds to complete our financing package.”
According to Brian Stark, JE Dunn  Construction senior project manager, initial site work on the new healthcare facility will begin immediately with the plan to begin pouring footings by late September or early October.
The new healthcare facility is scheduled to be completed in the spring of 2018.