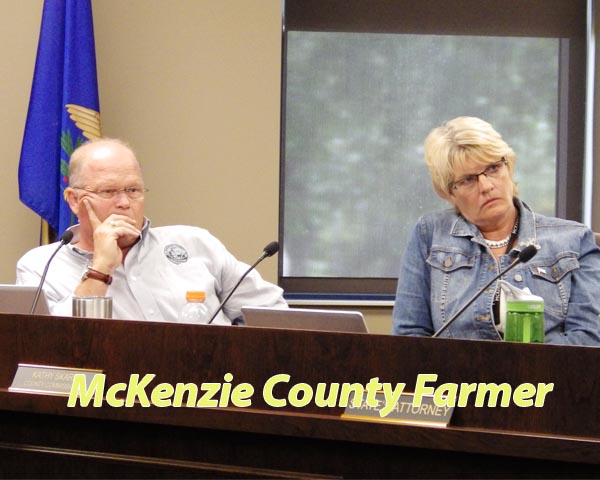 In April, McKenzie County Commissioner Kathy Skarda called 911 for a field fire near Keene, an experience that proved frustrating, she said.
“Can you drive to the fire and find an actual street address?” the 911 operator told her, she said. Skarda hung up and called the Keene fire chief instead.
“That was kind of frustrating for me. It’s a big area, a big county, I know that. But if you give the address for the farm, isn’t that close enough for 911 to send out fire and rescue trucks?” she asked state radio representatives Tuesday, July 19, at the McKenzie County Board of Commissioners meeting.
Mike Lynk and Bill Haas of North Dakota State Radio responded to Skarda’s questions and others posed by county commissioners as the board heard information about state radio dispatch and the Zuercher computer-aided dispatch proposed by the McKenzie County Sheriff’s Office as a replacement.
Currently the county is contracted through state radio based in Bismarck for dispatch services.
County auditor Linda Svihovec said Thursday, July 21, that county dispatch went away in January 2013 after tremendous turnover during the oil boom.
“It almost became a crisis point,” she said.
A switch from state radio to the Zuercher CAD would be a matter of “a level of customization desired versus what you’re paying for services,” Lynk said.
McKenzie County Sheriff Gary Schwartzenberger said bringing 911 dispatch to the county is in the best interest of its citizens.
“To me public safety is paramount over cost when it comes to people,” he said Thursday from Fargo, adding a local dispatch would bring better knowledge about the area.
Tailoring to McKenzie County’s needs would be a plus with the new CAD, Commissioner Vawnita Best said, “but at some point in time, we have to treat the taxpayers’ dollars in a way that we can prove to them that we’re being prudent with those dollars.”
State radio costs to the county are estimated at over $5,100 monthly for July 2017 to June 2019 with $276 in yearly CAD maintenance, state radio reported in a spreadsheet at the meeting.
New equipment for McKenzie County dispatch would bring a $299,112 standalone cost estimate, including $236,000 NG9-1-1 Airbus call taking equipment and a $25,000 voice recorder unit.
In addition, nearly $7,000 in yearly maintenance and a 12-person staff salaried at $457,344 total annually would bring the total equipment and personnel costs to $464,244.
Best added that research and the utmost care moving forward are vital as the county has invested $90,000 so far  in the CAD portion of the Zuercher module.
She also said coordination between dispatch and the sheriff’s office is key too.
“Is there a way the two can work together so we’re getting the 911 dispatch services and the sheriff’s office is getting the information in the format that they want it?” she asked.
“It would have to be explored,” Lynk answered, adding such an interface depends on money and compatibility.
Depending on the type of call, current 911 calls from the county go to state radio while 444-3654 rings the sheriff’s office which dispatches through Zuercher.
“If we have to go back and call back and forth to figure out where they’re at, or call McKenzie County to find out where they’re at because they’re hitting on the radio ... we get that identification of who it is through the radio but we don’t know where they’re at,” Lynk said.
Skarda’s experience of an emergency in a remote area can be a problem, Lynk said, as state radio’s map may not match up with a caller’s address.
“In your particular case, that shouldn’t happen,” Lynk told Skarda, who made her 911 call on her landline phone.
Any CAD system is address-based, Haas said, but first responders prefer landmark directions.
“Respond to the Joe Jones farm for a hay bale on fire west of the farm,” Haas said as an example.
“We give those units what we call commonsense directions, but unless they’re in the county a lot, quite often first responders have no idea where the address is,” Lynk said.
Near the end of the discussion, Lynk reiterated that a decision for 911 services is between spending the money to acquire dispatch or continuing to send 911 calls to state radio and use its CAD.
“We want to have a very well-rounded understanding of this decision that we’re making,” Best said, adding she would like to hear how other counties field emergency calls as a next step in the process.
A working group is studying the proposal, Schwartzenberger said, of which Best is a part. The group will likely submit a formal request to the board of commissioners this autumn, he said, after at least six months of studying dispatch, procedures and costs.
State radio serves 25 counties, Haas said.
McKenzie County has roughly 5,200 landlines and 6,000 cell phones, billing data showed for July.