Enjoying life in the triple digits 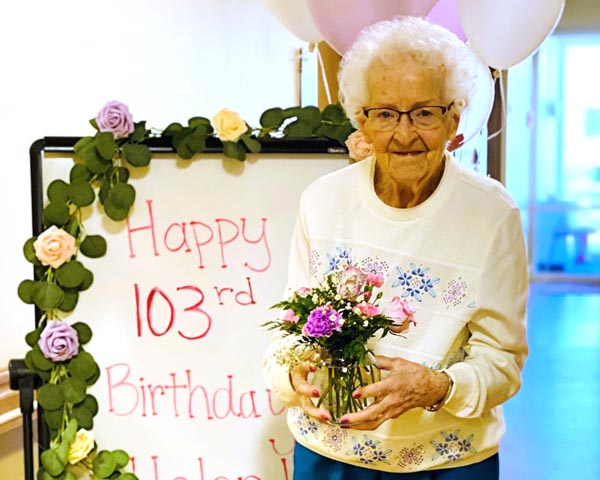 As Helen (Anderson) Muirhead, a resident of the Good Shepherd Home in Watford City, celebrated her 103rd birthday alongside family and friends last week, she was full of joy. With fresh flowers, flavor-popping punch and a belly full of cake, she wasn’t complaining. But her daughter says it’s her mother’s ability to look on the bright side that has brought her this far in life.
“The glass is never half empty, it is always at least three quarters full,” says Evelyn Wilson, Muirhead’s daughter, who flies from Alabama to Watford City every six weeks to visit her mother.
Born on March 22, 1918, in Charlson, N.D., it wouldn’t be long before Muirhead could best be found in a field somewhere, amongst all the things that were wild and free.
“Anything that she could do outdoors was her thing,” says Wilson. “She loved animals, riding horses, and flowers, birds and children.”
Muirhead graduated from Watford City High School in 1935 and then attended a business college in Fargo where she graduated in 1938.
“She worked in Bismarck and Billings before moving to Seattle,” says Wilson. “She loved Seattle and that’s where she met my dad, Sidney Muirhead.”
As Sidney had just returned from the war after serving in the United States Army, the couple got married in 1946, according to Wilson, who says her parents wasted no time before tying the knot.
“They met in October and married in January,” says Wilson. “She did everything he wanted to do. He was her man.”