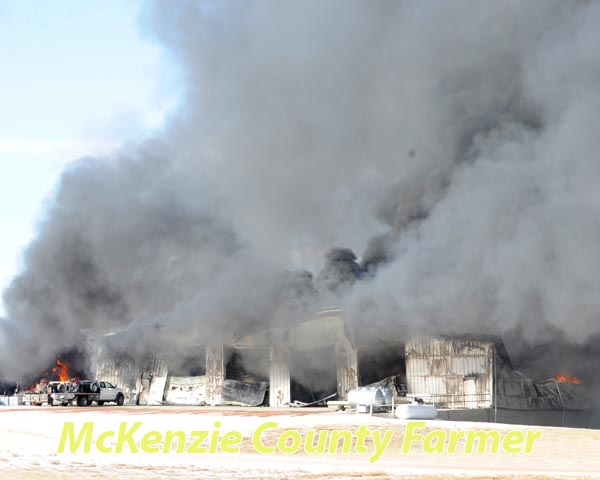 A Watford City oil service company is saying that they suffered significant losses as a result of a fire on Thursday, Feb. 18, that destroyed two shop buildings and several semi trucks and associated oilfield service equipment.
“We’re unsure of what caused the fire,” stated Kari Staal, who owns S & K Stack Testing with her husband, Shawn.
According to Staal, Jared Schaff, the company’s shop foreman, was outside moving snow when he noticed the fire and called the Watford City Fire Department a little after 2 p.m.
By the time that the fire department arrived on the scene, approximately one mile west of Watford City, the two shop buildings were already engulfed in flames and explosions could be heard from inside the structures.
According to Staal, two shops - one 120’x240’ and another 60’x180’ were destroyed in the blaze as well as several of the company’s trucks and equipment.
“We lost three Kenworth semi trucks with frac pumps, four Freightliner semi trucks, three support trucks and trailers, as well as several pickups,” stated Staal.