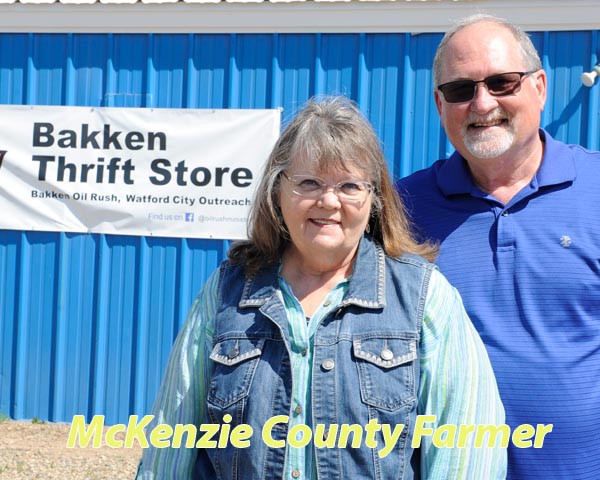 After seven years in the Bakken, Jim and Kathie Konsor officially turn the keys to the Bakken Oil Rush Ministry thrift store over to the board this week.
“This is so much more than leaving a job,” Jim Konsor said. “It feels like we are leaving our baby.”
If you consider that the Konsors dreamt up, created, found a way to pay for a project that helped thousands of new residents to Watford City and McKenzie County and have kept it alive for all of these years, that analogy is not too far-fetched.
At 60 years old, Jim first moved to the Bakken to move scoria. His plan was to work hard in the oil field for a few years to save money for retirement. Kathie stayed back in Minnesota.
But it didn’t take the Bible School educated, Christian musician, former travelling minister more than a few days to realize that his purpose in Watford City had nothing to do with moving scoria.
Konsor describes the feeling in the air in Watford City at that time. He remembers hearing story after story of people moving to the Bakken with their last dime and a tiny glimmer of hope. They came with little money and little support. Jim said that he felt a heaviness surrounding all of these workers trying to make a new life.
Moved by the people he met, Jim shared his feelings with Kathie and the two put their heads together - determined to do something.