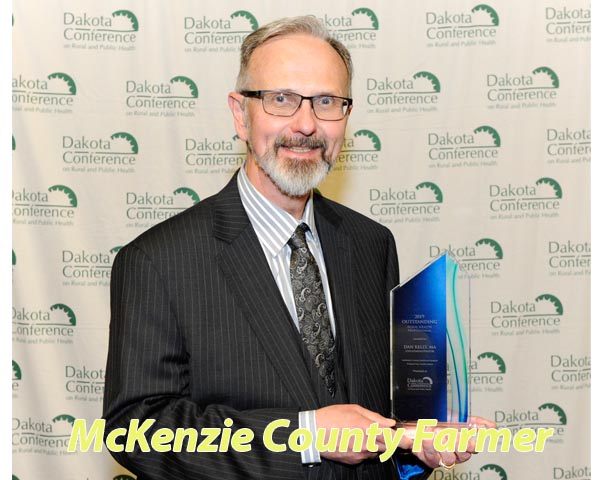 Little did Dan Kelly know how his vision, creativity and leadership skills would be tested when he arrived in Watford City 11 years ago as the new chief executive officer of McKenzie County Healthcare Systems, Inc. (MCHS).
Shortly after his arrival, the rural healthcare system underwent massive growth as Watford City became the epicenter of North Dakota’s oil activity.
It was because of Kelly’s vision for what the healthcare system should become in McKenzie County that he was recognized as the 2019 Outstanding Rural Health Professional during the 2019 Dakota Conference on Rural and Public Health’s annual banquet on Wednesday, June 12, in Minot.
“Dan came at the exact moment in time when the McKenzie County Healthcare Systems, Inc. needed his experience and background in administration of all levels of healthcare,” stated Patsy Levang, MCHS board of trustees president, who nominated Kelly for the award.
Under his leadership, Kelly became the driving force behind changing the way that the system provided healthcare to a rapidly growing community and spearheading the drive to construct a new healthcare complex.