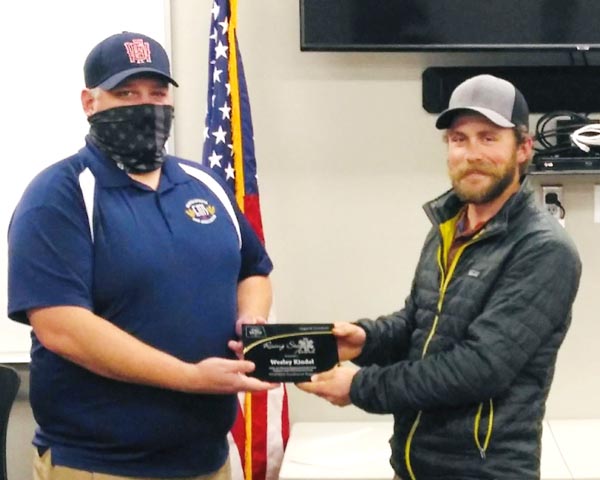 Wesley Kindel has been named the  2020 recipient of the northwest region’s Rising Star Award by the North Dakota Emergency Medical Services Association (NDEMSA). Kindel was presented with the award on Dec. 11, at the Arnegard fire station by Corey Johnson.
“Wesley is diligent and disciplined, calm under pressure, and dedicated beyond reproach to his skills and to his community at large,” says Travis Bateman, Badlands Search and Rescue director.
According to Bateman, Kindel was nominated for his contributions in emergency medical services by the  Badlands Search and Rescue, the McKenzie County Ambulance Service and the Arnegard Quick Response Unit.
“Wes has been an active EMT-B for at least one year,” Bateman says. “He pursued this certification on his own to better his community and fire department.”
Once Kindel became certified, Bateman says he took to it as a catalyst to join the ambulance district.
“Wesley, from the onset of his endeavor to become a certified EMT-B, went after it on his own dime and time in addition to his full-time job,” Bateman says.
During this duration of time, Kindel studied immensely, practiced with others on his own time to better grasp and understand the treatment procedures and levels, Bateman says.