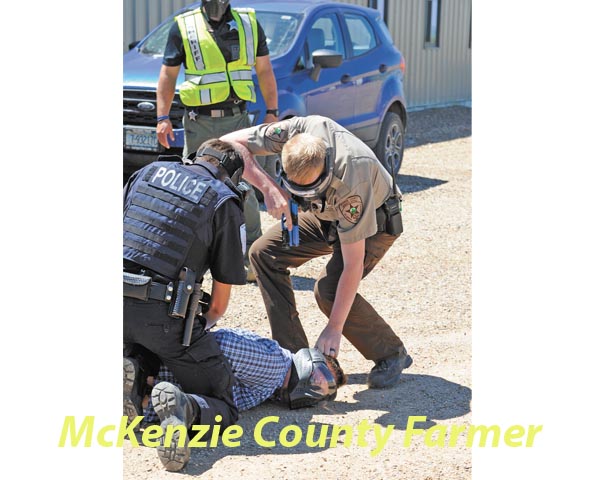 For 34 minutes, guns were blazing and bullets were flying as local law enforcement recently responded to a shooter at the Bear Den location of Crestwood Midstream. Fortunately, all of the law enforcement and victims survived because it was a drill.
“We had nine Crestwood employees, six were in the training and three were non-participant observers. The McKenzie County Sheriff’s Office had four in the training and four as observers,” says Craig Gardella, Crestwood Midstream’s Director of Security.
If you were involved in an active shooting situation, what would you do? You probably don’t know. But local law enforcement does, thanks to an active shooter training recently held by Gardella.
“What would you be doing, where would you be sitting, how would you react?” says Gardella, who retired from the New York Police Department (NYPD) with 25 years of experience as a police officer, detective and homicide sergeant.
The joint training, which was held at Crestwood’s Bear Den gas plant in Watford City, helped law enforcement agencies prepare for an active shooter situation in real life.