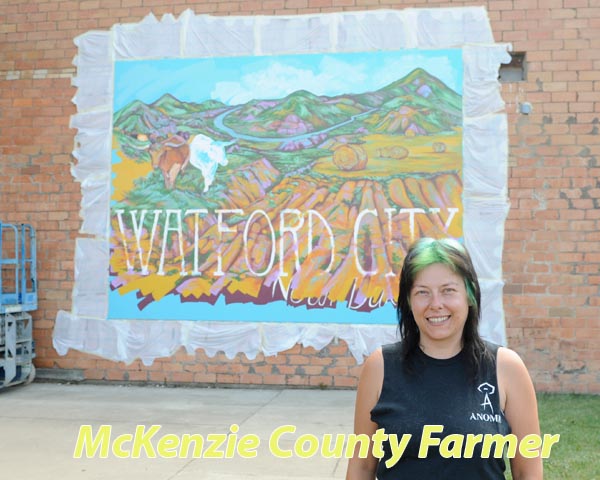 It was a beautiful, but hot day of 101 degrees in Watford City on Aug. 18, as Linda Roesch, a local visual artist, could be seen painting a mural on the outside of Door 204, a coffee shop located on Watford City’s Main Street.
“I gave myself 10 days for this chunk and I think that’s going to be about how long it takes,” says Roesch.
When Jessie Veeder recently contacted Roesch, she says that Veeder and her mother, Beth Veeder, were looking for a way to bring some vibrancy to the town of Watford City.
“After I did Jessie’s album cover, a few months went by and I did a mural in Jamestown that she saw on Facebook,” says Roesch.
Though Roesch has invested much of her time over the last two decades doing artwork, the mural recently created in Watford City is only her second one she’s ever done, she says.
“I usually don’t do murals because I’m scared of heights,” says Roesch. “But the scissor lift has made all the difference.”
As the local artist traveled from Jamestown to create the mural in Watford City, she began working with the art center of Jamestown three years ago and recently began teaching a college course at the University of Jamestown.
“I have a lot of things on my plate, but it’s been a good year,” Roesch says.
The attention Roesch’s murals have received is something she says will probably help her to conquer her fear of heights and do more down the road.