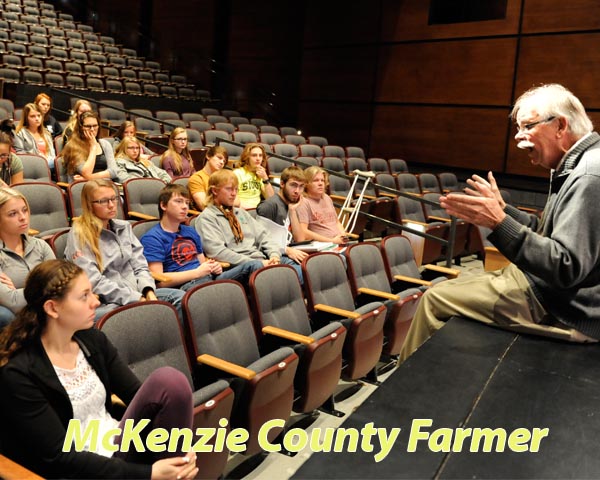 While newspapers will continue to be one of the major sources by which people will receive their news and information into the future, the actual printed newspaper will probably undergo changes.
That was the message that Mike Jacobs, the Community Journalism Program ambassador with the North Dakota Newspaper Education Foundation, shared with over 150 Watford City High School students on Thursday, Nov. 3.
Jacobs is the former editor of the Grand Forks Herald and a past president of the North Dakota Newspaper Association. In 1998, the Herald received a Pulitzer Prize in Public Service for its sustained coverage following a later spring blizzard, the flooding of the Red River and a fire that destroyed much of downtown Grand Forks, including the newspaper’s offices and printing facilities.
“You are at the beginning era of the media age,” Jacobs told the students who attended the three sessions on the importance of community journalism. “We don’t know where this media change is going. But we’ve already seen how Facebook, Microsoft and Amazon have already transformed the world through the use of the internet and the social media.”
And according to Jacobs, the shift in how people get their news and how it is being presented will present big opportunities in the future.
“Each of you today, through social media, are now an information source,” stated Jacobs, as he described how some of today’s breaking news is generated by people video streaming events from their smartphones. “But when it comes to newspaper journalism, there will always be good opportunities in North Dakota.”
And according to Jacobs, newspapers will always be a trusted source of information.
“You can’t make good decisions on issues that matter to you without a good source of information,” stated Jacobs. “There is a difference in the news sources, but newspapers have always been a trusted news source.”