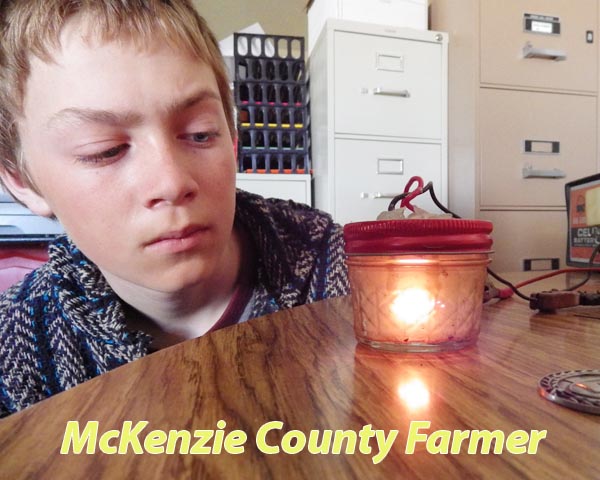 Shane Waltner flicked off the lights as an inch or so of graphite in a jelly jar glowed a brighter and brighter orange before (poof) going out.
“Generally when I find out how something works, I want to do it to wrap my mind around it,” the Horse Creek School seventh-grader said, arranging the items of his science project that vaulted him to first place in the junior division at 2017’s state science and engineering fair March 30-31 in Grand Forks after his wins at East Fairview and Williston.
Waltner’s lightbulb project began in mid-January with hours of testing leads, tinkering with jars and vacuum seals.
His interest got started after researching inventor Thomas Edison’s work with carbon filaments.
“But the real trick was creating an anaerobic environment,” Waltner said, lighting a broken birthday candle before dropping it in a jar.
“If I were to continue this project, I’d need to figure out a way to seal the jars better,” he said, as the light’s heat melts the glue seal.
Kim Kranz, Horse Creek’s schoolteacher, said she’s proud but not surprised by Waltner’s win.
After all, this is a kid who built  his own blacksmith forge to produce two knives from nails before he ran out of homemade charcoal.