Skarda brings a ray of sunshine to nursing home 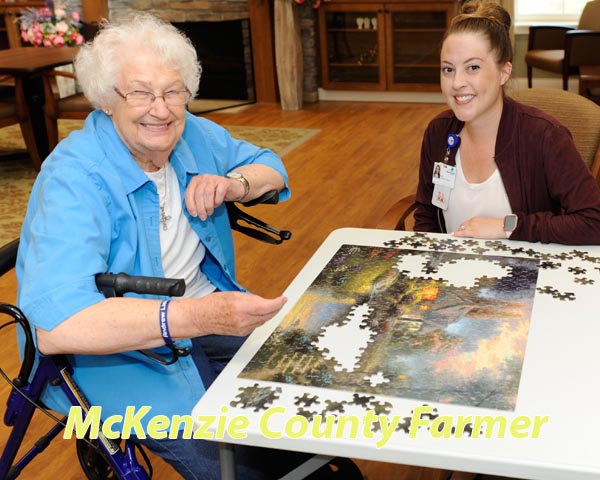 “Yes, that’s your beautiful mother and you’re beautiful too, just like her,” Sarah Skarda, McKenzie County Healthcare Systems, Inc. social worker designee, tells a resident of the Good Shepherd Home as she hands her a framed photograph of her mother’s obituary.
Skarda had just finished cutting and cropping a photograph to fit just perfectly in its place for a resident who had requested her mother’s obituary to be framed.
“I’m just going to stick this in there for her,” said Skarda carefully handling an original photograph. “If she doesn’t like it, I’ll redo it.”
As the resident walked away, she held her mother’s framed picture tightly against her walker with a beaming glow on her face.
For Skarda it was just another day of bringing smiles to the faces of the nursing home residents.
Working in a nursing home wasn’t the path that Skarda envisioned when she graduated with a business degree from the University of North Dakota. But after Dan Kelly, CEO of the McKenzie County Healthcare Systems, Inc., reached out to her in 2017 she decided to give it a try. And the 29-year-old hasn’t regretted her decision.