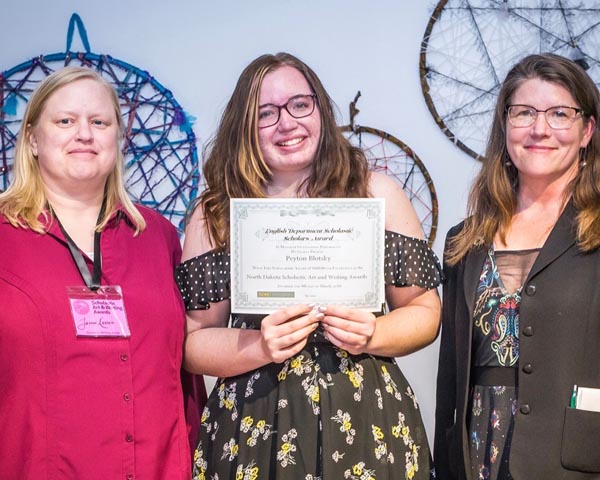 Sitting at the Scholastic Scholars Awards Ceremony last March, Watford City senior Peyton Blotsky had no idea what was coming her way. In Fargo at North Dakota State University (NDSU), she thought that she was just there to receive the Gold Key Award for her short story, “To Live is to Die.” By the end of the night, however, she was not only holding her Gold Key Award, but also the first ever NDSU English Department Scholastic Scholars Scholarship.
“I knew something was up when the event host made such a big deal about how glad she was that my parents were able to make it,” Blotsky said. “We were all so surprised!”
Blotsky has competed in the creative writing competition, the Scholastic Art and Writing competition, for the last two years. On her first go around she won an honorable mention for her piece, “Make it Stop,” while her older sister, Jordyn, took home a Gold Key Award. This year, however, she grabbed her own Gold Key Award and was one of the top five entries in North Dakota. That top five slot gave her the “American Voices” award and the opportunity to have her piece continue on to the national Scholastic Art and Writing competition.