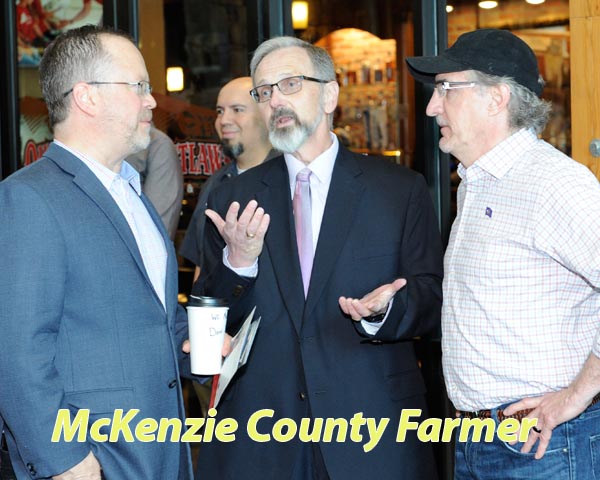 While Watford City has grown from a sleepy, little community of just over 1,750  six years ago to a bustling community with an estimated population of over 8,000 today thanks to the development of the Bakken Oil Field, there are still a lot of things that need to be addressed going forward.
That was the message that North Dakota Gov. Doug Burgum, Lt. Gov. Brent Sanford and other state officials heard from area business leaders and community members on Thursday, May 23. Burgum and his team were in Watford City as part of a public listening session to discuss ways the community can continue attracting and maintaining a vibrant workforce community as part of his Main Street Initiative program. The three pillars of the Main Street Initiative are attracting and retaining a 21st century workforce; promoting a healthy, vibrant community; and facilitating smart, efficient infrastructure.
“It’s exciting to see what is happening in Watford City,” stated Burgum as he welcomed a crowd of 150 area residents to the listening session. “Watford City is a shining star not only in North Dakota, but in the United States. It is one of the fastest growing communities in the nation.”
In the past few years, Watford City has seen the opening of the Rough Rider Center, a new high school and a new medical complex, the Wolf Pup Daycare as well as expanded parks and recreation opportunities, and more arts and cultural events. At the same time, 124 apartment buildings with 2,234 apartment units and six new motels have been built that cater almost exclusively to oil field workers.
While much has been done to make Watford City a better place to live and work, community leaders told Burgum that the lack of affordable single-family housing and daycare, as well as the lack of workers are still barriers to growth.