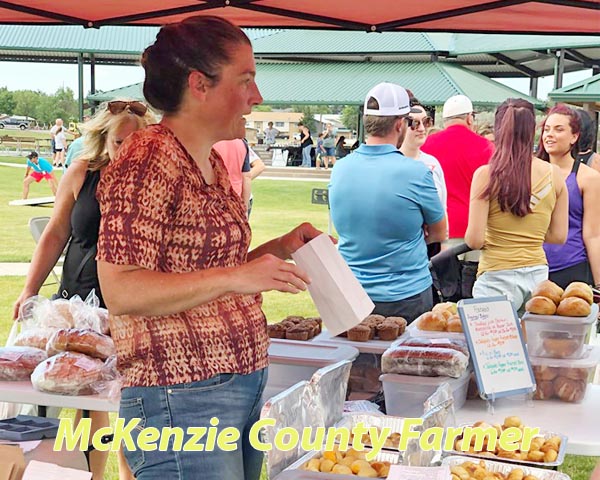 “Don’t spill it,” said Tom McCabe as a customer walked away with her arms full of glass jars of preserved veggies during the Watford Market at the Kent Pelton Nature Park in Watford City.
Whether it’s homemade jams, fresh breads, locally raised meats, homegrown veggies and fruits, or even soap bars derived from Angus cows, the list of items offered up by vendors year after year is ever-changing and never-ending.
“I wouldn’t run if it was a dollar, but it was a 20,” laughed McCabe as he swiftly snatched a $20 bill from being swept away by the wind.
As McCabe’s money box was brimming with cash, it’s nothing new for the Watford Market veteran as he’s participated in the event long enough to gain a loyal customer base by simply keeping his late mother’s tradition of preserving vegetables, also growing his own and making a little extra jingle as a result.
“If I sell everything I have, I’ll probably make about $900,” said McCabe as he looked to his tables growing gradually more bare.
As McCabe has always been the one and only go-to guy for vegetables, this year he had some friendly competition.