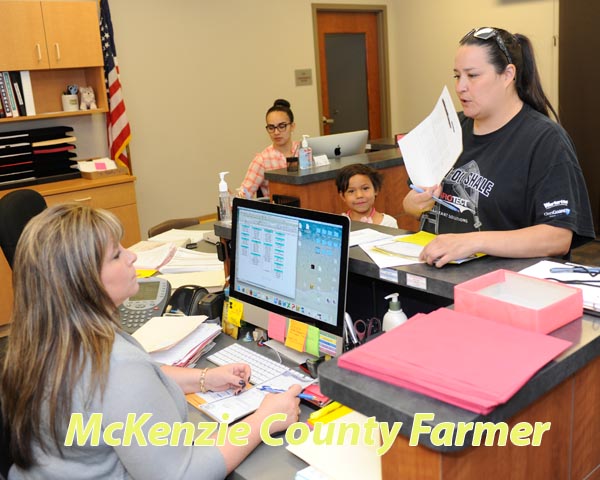 In spite of the slowdown in North Dakota’s oil patch, Watford City’s school administrators are anticipating another year of record enrollment when classes begin on Aug. 18.
“We started last school year with 1,390 students in the district,” states Steve Holen, McKenzie County Public School District No. 1 superintendent. “And we ended the year with 1,318 students.”
While school registration is still ongoing, Holen is fairly confident that the district will see slightly more than 1,400 students enrolled on the first day of school.
“We’ve never had an enrollment above 1,400 students in the district,” states Holen. “If we see our student numbers anywhere between 1,400 and 1,410 that would be great.”
Watford City Elementary School continues to be the driving force in the district’s enrollment number increase says Holen. And Kerrie Stansfield, elementary school principal, is already seeing record enrollment numbers heading into the start of school.
“As of Thursday, Aug. 4, we have registered 44 new students in the elementary school, while we have lost 12 students for a new gain of 33 students,” states Stansfield.
According to Stansfield, the elementary school, which houses kindergarten through the third grade, can accommodate 600 students.
“We are going to be pretty much maxed out for space this year,” states Stansfield. “We have hired seven new elementary school teachers and we are planning to have six sections in each of the grades.”
And that growth in the elementary school numbers is why Holen is optimistic that the district will continue to see enrollment growth into the future.
“I like our kindergarten numbers, which were 131 students as of Aug. 4,  as well as the other numbers we’re seeing in our lower grades,” states Holen. “Those numbers will be the basis for our continued growth as we graduate classes much smaller than what is coming into our system.

For complete story, subscribe to the McKenzie County Farmer