Winter couple explores the history of their 1930s home 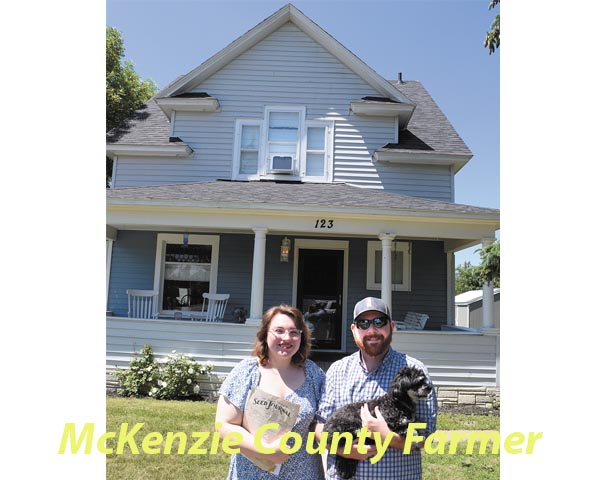 Picture this: A young couple moving to a new town, settling down in their idea of a dreamy, vintage home they get to call their own. All to discover a family of bats making a nest haven in their attic and uncovering fascinating facts about the original homeowners and becoming immersed in the family’s history.
Almost sounds like a movie plot, doesn’t it? Well, for Micah and Alexandria (Alex) Winter, it’s not.
When the couple moved from Ohio to western North Dakota in 2018, their plan was to use it as a stepping stone, not stay long-term. But like many young couples who move to the area, they had a change of heart after they stumbled upon a 1930s-period, colonial-style home in Arnegard.
“I was not too pleased coming here. It was horribly cold and snowy  and a culture shock,” she says.
But, North Dakota’s lavish landscape would eventually work its way into Alex’s heart.
“It just kind of spoke to me,” she says. “That was the one thing that got me through. That, and my love for Micah.”
As North Dakota’s breathtaking beauty bought more time for Alex to stick around, the couple eventually warmed up to the idea of staying.
“We didn’t think we were going to stay but we fell in love with the area, the people and thought, let’s settle down,” she says.
The couple originally sought a home in Alexander, until the one in Arnegard caught their eye.
“We didn’t want to live anywhere but there,” she says of Alexander.
The 1930s home that captured the couple was originally built and owned by Olaf Drovdal, and his wife, Anna Stenehjem, and their four children.
“We’ve always been vintage souls,” she says. “So we wanted something that had character but was livable.”
As the home met all their marks, the couple purchased the residence.
“It was easy to see that this was a place we could bring up our children,” she says.
In the wintertime, the couple moved in and Alex began painting pretty much anything she could get her hands on, anxious to put her own personal flare on the home.
“I consider it eclectic,” she says. “Every room is either blue or grey to fit the theme of the house.”
A self-proclaimed “bird nerd,” Alex says in the midst of move-in  day, they discovered Blue Jays playing outside a window and it inspired the name and theme of their home.
“It’s not very open. Every room is pretty well separated,” says Alex.
With an entryway, living room, dining room, kitchen, and office (den) on the first floor, the home is a traditional colonial style that features a cottage feel with a slight touch of farm house intertwined.
“Yeah, it’s not an open plan by any stretch of the imagination,” says Micah. “Which honestly, I’m okay with.”
The couple says they appreciate the divisions throughout the house that are not found in new-age homes.
“In terms of windows, we haven’t added anything extra,” says Alex. “We eventually want to replace the front door. We want it to be in keeping with our glassware to keep the original character of the house.”