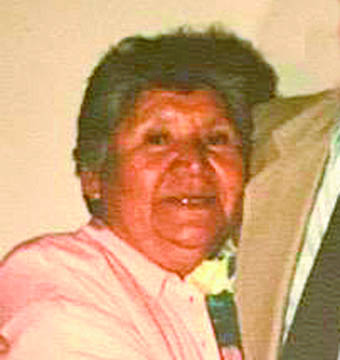 Eleanor Sorenson, 90, formerly of Keene, died Friday, Oct. 9, 2020, at a Stanley nursing home.
Eleanor was born May 22, 1930, to Leona Young Bear and Fred Hale. She was one of the first babies born at Elbowoods Hospital in Elbowoods. She was raised in the Sullys Lake area by her mom and grandmother, Katherine Hunts Along. She attended and graduated from boarding school in Haskell, Kan.
After returning home, Eleanor, also known by many as “Mary” or “Pudgie,” married Clayton Sorenson in January 1961, in Stanley. They made their home in Keene where she raised her family and helped on the farm. Their son, Arne, moved home to help on the farm in the late ’90s. Clayton died in 2009 and Eleanor continued to live independently until she entered Bethel Home in Stanley in 2015.
She loved serving her family. She tended her garden and made bread every week. Her produce was canned and preserved. She was community oriented and once ran for office on the tribal council. Her gentle spirit and generous smile welcomed everyone to her home. Blessed be her memory among us.
Eleanor is survived by her children, Sherman “Eldon” Sorenson of Mandan, Arne Sorenson of Keene, and Renae Anderson of St. Paul, Minn.; grandchildren, Scott Wilson, Tiffanie, Sarah, Tasha, Clayton, and Brittany Sorenson, Clayton, Walter, and David Sorenson and Collin Anderson; several great-grandchildren; brother, Sherman Sierra of Minot; and many extended family members, nephews, and nieces. She was preceded in death by her parents; husband; and numerous brothers and sisters.
Her funeral was held Saturday, Oct. 17, 2020, at First Lutheran Church, Keene with her burial at Good Hope Cemetery, Keene.
(Langhans Funeral Home, Parshall www.langhansfuneralhome.com)