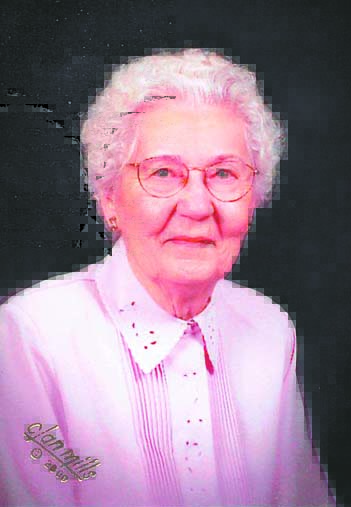 The prayers of Irene Agnus Foreman, age 102, were answered as the sun rose on Thursday morning, Sept. 30, 2021, when she was called home to heaven.
Born on the family farm on July 13, 1919, to George and Lena Brehm of Sanish, N.D., Irene was a living example of how to follow in the footsteps of Jesus and love with a whole heart. She expressed her abundant love of family and friends through her joy of cooking, baking, canning, crafting, embroidering, and gardening. She was always the first person willing to help neighbors and friends in need. Irene enjoyed listening to gospel music and if you ever heard her play the harmonica, self-taught, you were the recipient of a true blessing.
After growing up on the family farm where she helped raise two nieces after the death of her sister, Maybel Louise Houser in 1935, she continued her life of service and worked for two winters as a cook at the Keogh Ranch while coming home to help on the family farm in the summer, then at the Shoburg Hotel until she was married, and then as a cook for the New Town school in 1977, retiring in 1987.
She married Earl Sirene Foreman in 1943 and raised three loving children; Roger, Ellen, and Dale. She was dedicated to her family in all aspects of their lives, never missing an opportunity to create memories.
She was preceded in death by her parents, George and Lena Brehm; sister, Maybel; brothers, Lawrence, Roy, Walter, and Floyd; her son, Roger; her husband; and granddaughter, Lisa.
She is survived by her children, Ellen and husband Ron, Dale and wife Faye; grandchildren, DaNiel and husband Britt, Wesley, Christina and husband Joe, Matthew and Aaron; and great-grandchildren, Bailey, Ethan and Asher.
A private family service will be held at the Riverview Cemetery in New Town, N.D. Arrangements are under the care of Fulkerson-Stevenson Funeral Home of Watford City.www.fulkersons.com.