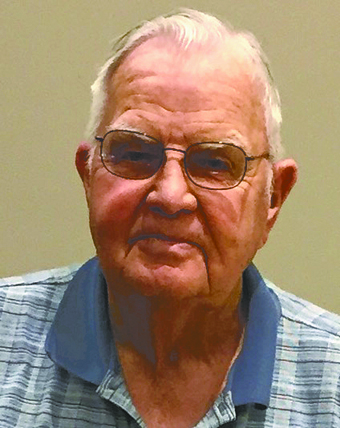 Jerome “Nick” Heggen of Billings, Mont., formerly of Alexander, N.D., passed away peacefully from natural causes on Wednesday, Nov. 11, 2020, at age 85. A private family service was held on Thursday, Nov. 12, in Billings with Pastor Kurt presiding. Burial will take place in Alexander, N.D., at a later date.
Nick was born in Rawson, N.D., on Sept. 23, 1935, to Howard and Julia (Larson) Heggen. He attended Alexander High School. He served honorably in the United States Army and was stationed in Louisiana and Texas. Nick married Esther Okland on Jan. 17, 1955, at Trinity Lutheran Church in Alexander. Together they farmed and raised 3 children, Tom, Julie and Andy. He was a disciplined farmer, a truck driver, a welder, a butcher, a mechanic, a carpenter, and if you were lucky he was sometimes a storyteller and he loved to dance with Esther. Together they learned to square dance, round dance, and ballroom dance and continued dancing right up until the past year.
He retired from farming and bought a house in Billings in 2010. He adjusted well to the “city life” and found renewed interest in playing cards, going for morning coffee and getting reacquainted with McKenzie County friends. Nick and Esther moved to Sweetwater Retirement Community in Billings in 2014, where they enjoyed dancing, card games, group outings and making many new friends.
Nick had a strong work ethic and was an honest and fair man. He was not comfortable expressing his emotions, but his love and devotion to his friends and family was undeniable.
He is survived by his wife of 65 years, Esther; his children, Tom of Red Lodge, Mont., Julie (Harv) Busta of St. Cloud, Minn., and Andy (Terri) of Billings, Mont.; grandchildren, Nicholas, Asha, Dalton, Luke, and Elliot; and great-grandchildren, Jayden, Brook, Danny, Levi, Oliver and Jane.
He was preceded in death by his infant brother, Howard Jerome Heggen; and his parents, Howard and Julia.
Esther and family send sincere thanks to the staff and residents at Sweetwater for their care and friendship over the years.
Memorials to the American Diabetes Association are appreciated.
Arrangements by Cremation & Funeral Gallery. Condolences may be left at www.cfgbillings.com